A. D. Flint- The Burning Hill

On the run from unjust court-martial back home, a young British soldier gets robbed and shot on Copacabana Beach. The bullet in Jake’s head should have been fatal, but miraculously, it saves him from a previously undetected condition that soon would have killed him. Jake doesn’t believe in fate, nor does he feel he owes anything to anybody, but he does hate injustice. Vilson, the teenage favela kid who fired the bullet, is a victim of injustice, in a corner with a corrupt cop and a sadistic drug-lord after his blood. With a turf war erupting in Vilson’s favela, fear stalks every narrow alleyway, and anyone dragged up to the notorious Burning Hill had better hope they’re dead before they get there. But it’s not just fear that shapes life in the favela, belief is also powerful, able to both save and destroy…

I seem to have acquired quite a taste for Brazilian set fiction of late, so The Burning Hill looked to be a bit of a tempter from the outset. With a screwed up central protagonist, razor sharp observations of life among the dispossessed, and positively throbbing with the rhythm and atmosphere of Rio de Janeiro, what more could you ask for?

Based on the author’s experience of living in Brazil. I think it’s fair to say that this location has obviously made a real impact, in terms of what has been observed and remembered from their time there. The book oozes authenticity from its opening pages depicting the woeful living conditions and threats from authority endured by the street kids, going on to the shockingly misjudged attempted robbery of a western tourist by two young boys from the favela. Flint clearly demarcates the problems experienced by the kids in their dealings with the less than moral representatives of law enforcement, and the dangerous forces at work within the favela itself at the hands of unscrupulous gang members. Little wonder that these kids dream of a better life, far away from a life of destitution, thievery and violence.

Throughout the book Flint uses the character of Vilson, a young boy abandoned by his mother, and having recently lost his brother, to represent life on the margins of society, and this works incredibly well as we bear witness to his anger, frustration and his futile attempts to overcome the feeling of abandonment. Through his turbulent interactions with Jake (the aforementioned tourist) and a female lawyer Eliane, the layers of Vilson’s character are exposed in dramatically different ways, revealing a tough street kid persona underpinned by all the vulnerability that his life experience has caused. Equally, by aligning his character with that of Jake, a disillusioned British ex-soldier with more than enough demons of his own, these two characters are a real tour de force and drive the narrative throughout. As much as Vilson and Jake are united by incurring the wrath of an utterly corrupt police officer, their relationship is defined by suspicion and misguided communication, where even the grandest of gestures inevitably go wrong, but even still serves to make their relationship compelling. This is the real hook of the book, as you become more and more inveigled in their trials and tribulations.

Flint is an incredibly visual writer, be it his depiction of the slums, the noise and hudy gurdy of vibrant Rio, the rural outreaches of the farming community, a truly terrifying rodeo or a visceral and tense boxing match. His pace of writing and attention to detail exerts a steely grip on the reader, and you genuinely find your reading speed increasing in the interludes of pure tension and dramatic action. Most importantly though he manages to keep the reader on the backfoot all the time, as the story took several unexpected and violent turns along the way, ramping up the tension and putting his central characters under extreme pressure, and by extension the reader too, which is all to the good. I enjoyed this book immensely with its multi-faceted characters both the good guys and the bad guys, and those that veer perilously between the two. Flint unerringly gets right beneath the skin of his characters. The book has a nervous energy, that increases the sense of danger and threat throughout, and with the vibrant and intuitive depiction of life in this most colourful of cities, that at its heart has a huge and unbridgeable chasm between the haves and have-nots, there is a real raw feeling of truth about the book too. Highly recommended.

(With thanks to Unbound for the ARC) 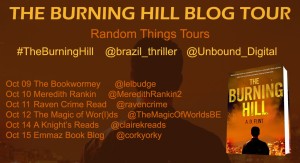