Twenty-first century India is a culture on fast forward, a society which is changing at breakneck speed, where two out of every three people are under the age of thirty-five. These young men and women grew up with the internet, smartphones and social media. But when it comes to love, the weight of thousands of years of tradition cannot so easily be set aside.

An extraordinary work of reportage, The Newlyweds is a portrait of modern India told through the stories of three young couples, who defy their families to pursue love. The lesbian couple forced to flee for a chance at a life together. The Hindu woman and Muslim man who must escape under the cover of night after being harassed by a violent mob. And the couple from different castes who know the terrible risk they run by marrying…

In The Newlyweds, Mansi Choksi has brought to light a powerful and eye-opening subject that certainly, to myself and I imagine other Western readers, is both disturbing and unsettling, underscored by a delicate sliver of hope for future generations of young Indians. As Choksi writes of the general belief in marriage in India,

“Marriage has a special place in Indian society…It is an arrangement between two families belonging to the same warp and weft in the tapestry of religion, caste, class, clan, region and language…When young people choose their own partners we threaten order with chaos.”

Throughout the book she sensitively and assuredly unpicks this statement by shining a light on three couples flouting these conventions, and the particular problems that this brings to their lives, the strain and danger it places on them, and the fragile longevity of their relationships.

From beginning to end, I read this book with an ever increasing sense of bewilderment at the arcane conventions of society that these three couples faced in their determination to be together. Dictated to by the extremely outdated written and unwritten rules of courtship and marriage, these three couples, Neetu and Darwinder, Monika and Arif and Reshma and Preeti, struggle to maintain their relationships under the weight of convention regarding religion, caste and homosexuality. As Arif, a Muslim man, in love with a Hindu woman, dejectedly observes,

“History is witness that Hindus and Muslims cannot be together. If we are snakes, they are mongooses.”

Neetu and Darwinder incite the wrath of the ‘khap panchayat’, “unelected councils of upper caste elders in the rural communties who routinely issue diktats for disturbing the delicate balance of the caste system” by being of the same village but different castes. For years India was in the grasp of an arcane law, as part of the Indian Penal Code deeming homosexuality as a crime commensurate with bestiality and paedophilia, a law thankfully rewritten, but leaving in its wake a pervading sense of suspicion and hatred of gay couples, like Reshma and Preeti. Throw into the mix the dark and disturbing world of ‘honour’ killings of young women deemed to have defied their families and communities in their choice of partner, and you get a real sense of the barriers, threats of violence and estrangement that these couples face in their attachment to one another. Choksi guides us through the trials and tribulations of each with a clear-sighted and powerful commentary, intertwining their individual stories with an astute eye on the social mores of Indian society in general.

What I loved about this book, aside from the razor sharp observations, and obviously incredibly thorough research, were the very real human flaws that each couple exhibit. There was no sugar coating of their personalities, despite the obvious hardships and sadness that each endure with their decisions to ostracise themselves from their communities, to adopt the religion of their partner, or to find themselves alone as the relationship disintegrates. There are moments of vanity, insecurity, ingratitude, and betrayal that add a real emotional heft to the depiction of each, and arouses in the reader feelings of annoyance or empathy and so on.

I don’t read a huge amount of non-fiction, but I do read a great deal of Indian fiction and crime fiction, so the premise of The Newlyweds really appealed to gain further insight into another aspect of Indian society, largely unfamiliar to me. Mansi Choksi handles her subject matter with aplomb, bringing us a book that is incredibly readable, vivid, thought-provoking and enlightening. I thoroughly enjoyed this one. Recommended.

Mansi Choksi is a writer based in Dubai, United Arab Emirates and Mumbai, India. She writes about crime, gender, identity, opportunity and pop-culture. Her writing has appeared in print and online at Harper’s, The New York Times, The New Yorker, National Geographic, Slate and The Atlantic.

Her book , “The Newlyweds,” about love and crime in India, won the Overseas Press Club of America’s 2019 Madeline Dane Ross Award. It was also a 2018 finalist for the Livingston Award in International Reporting. In 2018, she won New York University’s Reporting Award to explore Hindu nationalism. In 2016, she was named an inaugural fellow of the International Women’s Media Foundation’s Reporting Grant for Women’s Stories to write about women in post-conflict Sri Lanka.

(With the is to Icon Books for the ARC) 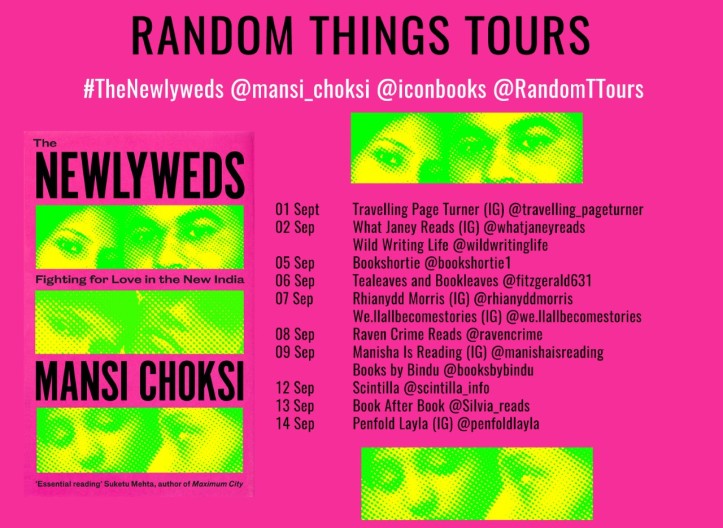