The Infidel Stain is the second book in M. J. Carter’s Blake and Avery mystery series, following on from CWA New Blood Dagger shortlisted and Bailey’s Women’s Prize long- listed The Strangler Vine. In this special guest post Miranda shares her thoughts on all things Poe, and his influence on the early days of the detective fiction genre…

“The Infidel Stain is set in 1841, the same year—not altogether accidentally—that what is arguably the first detective story was published. ‘The Murders in the Rue Morgue’ was written by Edgar Allan Poe, the American writer, poet and genius known best for his brilliant gothic short stories and poems and—quite unfairly as it turned out—for his short, syphilitic, drug-addled, mad life. But that’s another story. This very blog is named in honour of his great poem, ‘The Raven’.

At the heart of the story is an impossible crime: two women brutally murdered in a 4th floor room locked from the inside. Neighbours think they heard the voice of the murderer but they cannot agree what language was spoken. C August Dupin, gentleman of leisure who lives in self-imposed seclusion with his friend the narrator, and goes out only at night, is intrigued by reports and offers his services to the Chief of Police. The solution is clever, extremely creepy, entirely satisfying and Dupin arrives at it with a succession of brilliant imaginative deductions.

Poe wrote two more stories about Dupin. He called them his ‘tales of ratiocination’, Dupin’s name for his method —the idea that through close observation, careful research, the ability to put himself in the mind of the criminal, and deductive reasoning, he can see connections where others cannot.

The point about ‘The Murders in the Rue Morgue’ —apart from the fact that it is still a terrific read—is that in it Poe invented so many of the classic ingredients of the mystery story as its come down to us: the conundrum of the unsolvable crime (‘locked-room mysteries’ are themselves a whole sub-genre), the atmosphere of claustrophobia and night, the clod-hopping police, the clues which the reader can follow, the solution announced at the end and then the reasoning behind it explained. And of course the prototype of the brilliant amateur detective —years before the word ‘detective’ was actually coined. Dupin is an eccentric gentleman outsider who likes puzzles and codes, and closes himself off from human interaction—apart from his unnamed friend who tells the stories. He regards the cases as intellectual challenges to which he applies his method. You can immediately see him in Sherlock Holmes, Poirot, Dorothy L Sayers’ Lord Peter Wimsey, Margery Allingham’s Campion and a slew of others. Conan Doyle acknowledged the debt. He wrote of Poe: ‘Each (of his stories) is a root from which a whole literature developed.’

Even today it is, I think, almost impossible for a mystery writer to completely avoid Poe’s long shadow. Almost inadvertently I find in my own books that I’ve followed him. I have a brilliant detective and a less smart narrator. I made my detective deliberately working class and grouchy, but he is still a classic outsider and I prize his cleverness, his ability to read faces and tells, his creative imagination, and his ability to put himself in other’s shoes. Vive Mr Poe!”

M. J. Carter is a former journalist and the author of two acclaimed works of non-fiction: Anthony Blunt: His Lives and The Three Emperors: Three Cousins, Three Empires and the Road to World War One. Follow on Twitter @MJCarter10

Check out a Guardian feature here on Carter’s penchant for historical crime fiction.

Reviews of The Infidel Stain can be found at: 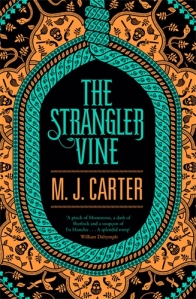 Calcutta 1837. The East India Company rules India – or most of it; and its most notorious and celebrated son, Xavier Mountstuart, has gone missing. William Avery, a down-at-heel junior officer in the Company’s army, is sent to find him, in the unlikely company of the enigmatic and uncouth Jeremiah Blake. A more mismatched duo couldn’t be imagined, but they must bury their differences as they are caught up in a search that turns up too many unanswered questions and seems bound to end in failure. What was it that so captivated Mountstuart about the Thugs, the murderous sect of Kali-worshippers who strangle innocent travellers by the roadside? Who is Jeremiah Blake and can he be trusted? And why is the whole enterprise shrouded in such secrecy? In the dark heart of Company India, Avery will have to fight for his very life, and in defence of a truth he will wish he had never learned… 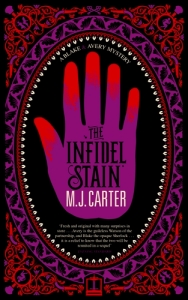 It’s 1841, and three years after we left them at the close of The Strangler Vine, Blake and Avery are reunited in very different circumstances in London. There has been a series of dreadful murders in the slums of the printing district, which the police mysteriously refuse to investigate, and Blake and Avery must find the culprit before he kills again…