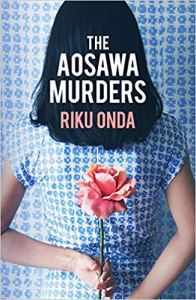 On a stormy summer day the Aosawas, owners of a prominent local hospital, host a large birthday party. The occasion turns into tragedy when 17 people die from cyanide in their drinks. The only surviving links to what might have happened are a cryptic verse that could be the killer’s, and the physician’s bewitching blind daughter, Hisako, the only person spared injury. But the youth who emerges as the prime suspect commits suicide that October, effectively sealing his guilt while consigning his motives to mystery.

The police are convinced that Hisako had a role in the crime, as are many in the town, including the author of a bestselling book about the murders written a decade after the incident, who was herself a childhood friend of Hisako’ and witness to the discovery of the murders. The truth is revealed through a skilful juggling of testimony by different voices: family members, witnesses and neighbours, police investigators and of course the mesmerising Hisako herself…

Having a wee bit of a sojourn into Japanese crime fiction so couldn’t resist the premise of this one- a mass poisoning at a family gathering and a degree of doubt of the guilt of the man accused of the crime. What transpires is a clever, compelling and perfectly plotted tale that at times throws up many more questions than it answers…

Composed of a series of vignettes in an almost testimonial form, the book circles around a collection of people that had either had a direct connection to the crime, or some kind of personal connection to the victims, the accused or were merely onlookers to the strange events of the Aosawa murders. This had a mesmerising effect of either drawing the reader closely in to the actual event or holding us at an arm’s length as some of the narrators had a much less involved role in the central crime. As you reach the end of each little section, you find yourself having a sense of wonderful anticipation as to whether the next narrative will provide further clues as to the tragic events of that day and unmask the true killer. What then transpires is an intriguing game of hide and reveal as the author cunningly withholds, and then suddenly exposes, the personal narratives that inch us closer to a satisfying resolution. I loved the adoption of this particular structure which leads to a circular narrative instead of a more simplistic linear one, and looking back on the book now, even the most seemingly unimportant character testimony can withhold vital clues.

Alongside this intriguing narrative structure, the author also injects the book with some incredibly interesting ruminations on the role of truth and memory, be it in the dissection of a crime or in the more every day scenario of us constructing our personal histories, and what we perceive as truthful memories. Onda consistently makes the point that truth is always filtered through an individual’s perception of events, and what is ‘true’ to one person’s perception of an event, may not be reflective of another’s perception of the same event. This theory is mirrored throughout the book with the use of the polyphonic voices as each character recounts their perception of the Aosawa murders, whatever their personal distance from the crime. Consequently, the reader is engaged in a mystery where nobody’s account can be taken at face value, and sometimes looking back on the event, in the case of the now retired detective, can cast doubt on what was taken as truth at the time, and new avenues of investigation can open up. This idea of filtered truth also applies to our perception of the main protagonists as we see them reflected through the testimonies of others, altering our perception or leading us to have or own suspicions as to their role in the crime, or how they have implicated others.

With such a complexity in the characterisation and plotting, there is always a danger of the author losing focus on the more statutory elements of a story in terms of setting and atmosphere, which grounds the reader in the unique location and environment of the book. Not so with this one, as there is a fixed attention on the diurnal course of nature, and equally how an appreciation of the natural environment and seasonal changes provide both succour and inspiration for some of the key characters. I thought that some of the more extended naturalistic writing was beautiful in its delivery, and afforded some time for the reader to have the grip of dark deeds loosened from time to time. When taken in unison with the sophisticated plotting, and more existential musing on truth and memory, this endeared me to this book even more, as I am always intrigued to how the crime genre can be stretched and manipulated to broaden its horizons. A definite candidate for a favourite crime read of the year, and highly recommended.

Catch up with the Random Things Tour at these excellent sites: 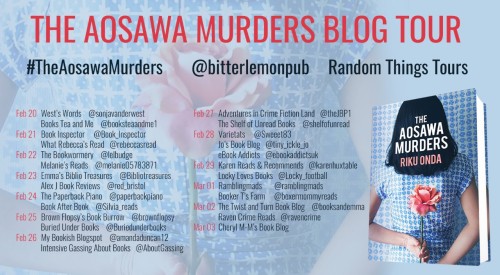