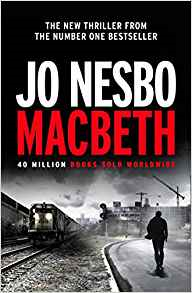 He’s the best cop they’ve got. When a drug bust turns into a bloodbath it’s up to Inspector Macbeth and his team to clean up the mess. He’s also an ex-drug addict with a troubled past. He’s rewarded for his success. Power. Money. Respect. They’re all within reach. But a man like him won’t get to the top. Plagued by hallucinations and paranoia, Macbeth starts to unravel. He’s convinced he won’t get what is rightfully his. Unless he kills for it.

With the Hogarth Shakespeare Project calling on the talents of some of the acclaimed novelists of today, to retell a selection of Shakespeare’s finest plays, who better to reimagine Macbeth with all its inherent darkness than bestselling crime author Jo Nesbo. Talking of his inspiration for his own Macbeth, Nesbo says that the original is “a thriller about the struggle for power, set both in a gloomy, stormy, noir like setting, and in a dark, paranoid human mind”, so not that far removed from the familiar crime writing tropes  we all recognise, So how does Nesbo’s take on this Shakespeare classic measure up?

Having pretty much forgotten the plot of Macbeth since reading it years ago, it was quite enjoyable not overthinking the comparisons and similarities between the play and Nesbo’s rendition, so however scant your knowledge of the original, the key characters and pivotal scenes are well in evidence here. The book is suffused with direct and reworked familiar quotes from the play, and at times there’s a cheery playfulness to how Nesbo attributes them to certain characters, tempered by the darkest proclamations that arise from the darkest deeds in the book. Sometimes the language feels a little over reliant on  quotes, even a touch forced. It seems that Nesbo gets too caught up in the need to echo the original, and the dialogue that comes from some characters seems a little disingenuous to our perception of them, and makes the dialogue rigid at times.

However, like Shakespeare’s version, and as Nesbo alluded to himself, the key theme is power, and the desperate, violent and dehumanising actions that one man, the eponymous police officer Macbeth, takes to gain and consolidate power. As one character says of Macbeth’s lust for power, “He’s already managed to divest himself of any emotions that tie him to morality and humanity, now power is his new and only lover” and this is what Nesbo captures so perfectly in his characterisation. Macbeth, aided and abetted by his conniving lover Lady, is an intense and mesmerising character throughout, battling his physical addiction to ‘brew’, scheming and plotting, driven by his suffocating love for Lady and his own thirst for complete autocracy. I loved the sense of this claustrophobic vacuum that they exist in, completely immersed in each other, and both hungry for power, until the seismic shift in their relationship. Likewise, I thought that Duff was an incredibly interesting character, at one time the absolute confidante of Macbeth, but now as obsessed with justice as Macbeth is with power, whatever the cost to them both. There is a large cast of characters, and Nesbo balances them very well in what is more of a reading marathon than a sprint, keeping the reader on the back foot with the double dealing, betrayal, and sudden outbursts of extreme violence, as faithful to Shakespeare himself, he decreases them by the page by nefarious means.

Undoubtedly, my favourite aspect of the book was the setting, in a reimagined Scottish city replete with poisonous air, seedy backstreets, the purveyors of human misery in drugs or gambling, a crumbling economy, but all resonating with the echo of history. Nesbo is incredibly good at grounding the reader in the specific location against which his characters vent and rage. plot and scheme and love and die, and there’s an incredibly visual quality to the book as a whole which is vital to alleviate the intensity of the raw emotions much in evidence here. This, and the very well defined characterisation was definitely central to my overall enjoyment of the book, which, although a little drawn out at times, slowed down by the necessity to reference the original a little too tenaciously, was a satisfying read overall. It mostly captured the dark and dangerous ambition and melancholy of Shakespeare’s original, and I’m sure this proved a very interesting writing experience for Nesbo himself.

Sign up to the official Jo Nesbo monthly emails here for the latest book and event news, exclusive content from Jo and competitions you won’t find anywhere else.

(With thanks to Vintage for the ARC)

Follow the Macbeth blog tour at these excellent sites: 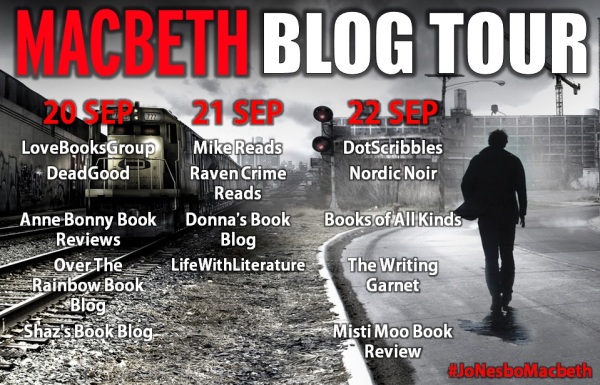