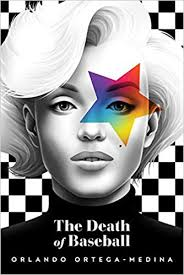 Former Little League champion Kimitake “Clyde” Koba finds strength in the belief that he is the reincarnation of Marilyn Monroe as he struggles to escape the ghost of his brother and his alcoholic father. Born on Yom Kippur, teen prodigy Raphael Dweck has been told his whole life that he has a special purpose in God’s plan. The only problem is, he can’t shake off his doubts, his urges, or the trail of trouble and ruin that follow in his wake.

A decade later, Raphael and ‘Marilyn’ find each other wandering the plastic-bright streets of Hollywood and set out to make a documentary about the transmigration of souls. But when the roleplaying goes too far, they find themselves past the point of no return in their quest to prove who and what they are to their families, God, the world, and themselves…

I first encountered the work of Orlando Ortega-Medina through his brilliant, emotionally charged and meditative short story collection Jerusalem Ablaze etched into my memory as one of the trickiest reviews I have ever had to write. Now having read Ortega-Medina’s full length novel, The Death of Baseball I feel that my reviewing skills will be put to the test once again, as I try and communicate to you all how necessary, heartfelt, thought-provoking and sublimely perfect this book is. Oh yes. I did say perfect…

When I began reading this book, I somewhat intuitively avoided reading the full synopsis, as I had a vibe from the outset, that I very much just wanted to be taken wherever this book wished to take me. Aside from the sway of the beautifully retro cover, I felt from a very early stage of reading that this was a book that would consume me completely, and consequently this was one of the rare occasions where this was the only book I was reading at the time. I think this was also influenced by the fact that Ortega-Medina’s two main protagonists, Raphael, and Marilyn are so singularly deserving of the reader’s full attention, as the drama, tragedy, and human frailty plays out against a backdrop of changing decades and social mores, America and Israel, conflict and peace, and the underlying need of both to form a lasting emotional connection. I am only going to give you a silhouette of the characters and the plot, as I think this is a book that needs to be discovered in an almost neutral vacuum, to fully appreciate its emotional depth, and to open yourself up to some extremely accomplished and sublime storytelling.

To say that these characters’  lives are troubled and tempestuous would be an understatement, and as the author highlights the crisis of conscience, faith and loyalty, he weighs them down with, I can guarantee you will be held completely in their thrall. I can honestly say that I did have a sustained emotional response to this book, which is incredibly unusual, as books rarely achieve this for me.  I think the emotional heft, moments of extreme poignancy, frustration and anger that we bear witness to in the lives of these characters, is so beautifully realised and communicated that you do become completely immersed in the powerful positivity and destructing negativity, that Raphael and Marilyn seem to take it in turns to display. These conflicting traits lead on occasion to impetuous, ill-judged acts, tempered by moments of extreme tenderness and self realisation as they battle with issues of faith, identity and the instances of wretched tragedy that blight their lives. However, despite the incredibly visceral humanity of this book, I did feel that a certain sense of equanimity was achieved in the life of one character, and that their struggle for acceptance and recognition did come to fruition, which lifted the book to a more life affirming plain.

Tied up with the superlative characterisation of Raphael, Marilyn and the social, religious and familial crisis they suffer, I would also draw attention to two other strengths of the narrative of this book. One is location and period detail, firmly rooting us in the changing decades from the 60s through the 80s, and the way that Ortega-Medina subtly places us in the grip of each decade, using the recognisable markers of each decade, and certain tumultuous events both in America and Israel. The section of the book set in Israel was particularly compulsive reading, as Ortega-Medina places Raphael in a largely unfamiliar setting, under pressure with the weight of certain aspects of his family history, clinging to his faith, pushing the boundaries of his sexuality, and tentatively feeling his way to love. The threat of war with Egypt plays out in the background, and this sojourn in Israel also provides an incredibly interesting reappraisal and exploration of Raphael’s faith, and the seismic effect on his own character that events in Israel cause.

When I’ve been talking about this book to friends and colleagues, another aspect I keep drawing attention to is the sheer cleverness of the structure. Every chapter, and yes, it is every chapter, can be read in isolation to the others as a completely self contained short story, whilst not disrupting the momentum and continuity of the story in any way. Once I stumbled upon this notion and blown away by the skill of this, I actually went back through the book at random picking certain chapters to re-read, particularly those in Israel, and those set in a certain location towards to the end of the book. When I reviewed Jerusalem Ablaze, I drew attention to the fact that this author so quickly enables the reader to connect on an emotional level with his characters, and this sustained use of structuring his chapters like this, adds even more to the intensity with which he enveigles us in his character’s lives. The Death of Baseball is a glorious miasma of contradictions and conflicts, the need to love, the need for acceptance and recognition, fame, faith, abuse, identity and hope. I found it thought provoking and powerfully emotional, and I loved the way it immersed me so fully in these two lives with their unique voices. This book has such a strong message at its core, clearly illustrating how we are all the same in our desire to achieve contentment and an equilibrium in our lives, however we choose to live and with whomever we choose to love. Highly, highly recommended.

(With thanks to Cloud Lodge Books for the ARC)