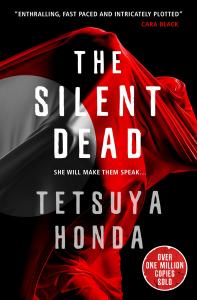 When a mutilated body wrapped in a blue tarpaulin is found in a quiet neighbourhood, Lieutenant Reiko Himekawa and her squad are assigned the case. As the youngest female detective in the Homicide Division, Reiko has a lot to prove, but she has an undeniable ability to solve crimes. When she uncovers more murders with the same signature, she knows there is a serial killer at work. What is Strawberry Night, the dark web group that links all the victims? And how long will Reiko survive, now the killer knows her name?

I will put my hands up straightaway and confess that my prior reading, and knowledge of, Japanese crime fiction is rudimentary at best, so please forgive any noticeable faux pas’ or misunderstandings on my part of the genre. So here we have Raven’s first introduction into this potentially interesting subgenre of crime fiction writing…

Shining a light into the contemporary sinister recesses of the dark web, The Silent Dead, is the first of Honda’s ongoing crime series featuring Reiko Himekawa, a Homicide Detective with the Tokyo Metropolitan Police. In common with the best socially driven crime fiction,  Himekawa is a female detective in an extremely patriarchal institution, and much of the book focuses on not only her as a woman with an emotionally fractured past, but the attitude displayed to her by her male counterparts within the police force. Indeed, this examination of Himekawa, and by extension, her role in this testosterone-fuelled world was central to my enjoyment of the book. Hence, the latent and overt sexism she experiences by word and deed, and her critical self-examination throughout the book, moulds her into one of the most compelling and real female characters I have encountered for some time.

I like the way she continually questions the noble intentions of her chosen career, but yet is self aware enough to realise that this success has made her arrogant in some respects to her relationship with the victims she encounters. I also enjoyed the way Honda stretches and exerts pressure on her to continually reassess her sense of self, as the story develops, and her realisation that she is  prone to moments of weakness, despite her seemingly cast iron intention to overcome the emotional and physical damage caused by a crime in her own past. She is surrounded by a mixed cast of male characters who exhibit contrasting attitudes to Himekawa which range from dislike, to mild flirtation, to professional jealousy, and the casual sexism that defines most of them gives rise to a mixture of feelings in the reader, and toys with our empathies. Equally, I liked Honda’s depiction of the professional and territorial rivalries that exist between the competing police units that spilled over into Himekawa’s investigation, and the attitudes of her counterparts outside her own Metropolitan police department, to her and her team of murder detectives.

The plot is compelling, and there is a killer twist- quite literally- at the close of the book which was wonderfully disguised up to that point. The examination of the dark web and the way that even the most ordinary citizen can be drawn into, and excited by, public execution was a consistent theme in the book as the body count mounted exponentially. So many serial killer thrillers fall victim to obvious tropes within the genre, but this book in common with the best, provided some thoughtful and genuinely intuitive psychological insights into the killer gene that may lurk within us all, and what drives seemingly ordinary people to derive pleasure from violence.

With such  strength in the characterisation, narrative and plot, it does feel a shame to draw attention to the one weakness in the book, which is no criticism of the author. There is a noticeable flaw in the translation of the dialogue, which has the snappy rhythm typical of the American crime fiction genre, but seemed quaintly old-fashioned in some of the turns of phrase used. Indeed, at certain points I felt I had wandered into the black and white world of Dixon of Dock Green, where I expected characters to be all ‘Cor, lummy’ and ‘You’re nicked’. Some of the expressions used just felt a little disingenuous and out of place, but I think this more a consequence of the translation itself than the author’s original intention.

So all in all my first dip into Japanese crime fiction was an extremely pleasurable one, though not without a minor flaw. Loved the characters, the tight plotting, and the playing out of a visceral and psychologically interesting dimension to what could have been just a standard addition to the serial killer thriller genre. Will certainly be seeking out not only more of the books in this series, but this has also sparked my interest in further exploring this crime sub-genre generally. Recommended.

(With thanks to Titan Books for the ARC)