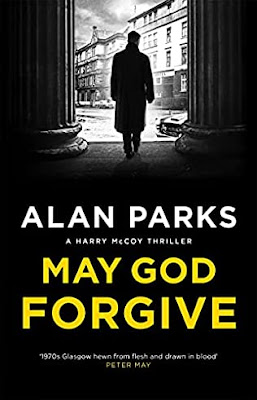 Glasgow is a city in mourning. An arson attack on a hairdresser’s has left five dead. Tempers are frayed and sentiments running high. When three youths are charged the city goes wild. A crowd gathers outside the courthouse but as the police drive the young men to prison, the van is rammed by a truck, and the men are grabbed and bundled into a car. The next day, the body of one of them is dumped in the city centre. A note has been sent to the newspaper: one down, two to go. Detective Harry McCoy has twenty-four hours to find the kidnapped boys before they all turn up dead, and it is going to mean taking down some of Glasgow’s most powerful people to do it . . .

So, for anyone who has previously read my extremely complimentary reviews of Bloody January, February’s Son, Bobby March Will Live Forever and The April Dead , you can expect more of the same in May God Forgive.  This is quite frankly one of the most accomplished series on the contemporary crime fiction scene, and now in its fifth instalment it certainly shows no signs of predictability, or loss of momentum, which is music to the ears of all us crime lovers…

Like many of the readers of this series, we can all appreciate the certain rough charm about the main police protagonist Detective Harry McCoy. With his tentative return to work after a recent episode of illness, mainlining the old Pepto-Bismol at every opportunity, but stubbornly refusing to cut back on the fags, the booze and the bad diet, McCoy is his own worst enemy. A man squeamish at the sight of blood, preferring to lurk on the well worn steps outside the city mortuary to avoid observing an autopsy. A man who counts an infamous criminal figure of the Glaswegian underworld as a good pal, and is also generally a bit of a soft touch when he sees others down at heel or in a state of need or distress. Also a man who doesn’t strictly follow the codes of practice in his occupation, and generally manipulates the rules to achieve his ends. He’s intuitive, wily, extremely dogged and, in common with most fictional detectives has a dark past, in his case, one steeped in neglect and familial disruption. However, aided by his trusty sidekick Detective Watson, and his propensity to confront and challenge those he suspects of wrong doing, outside the boundaries of his professional persona, McCoy’s stubbornness and sense of justice will invariably win the day.

There’s a couple of absolutely cracking plotlines running through this one, steeped in revenge and retribution. A motiveless attack on a hairdressers. the discovery of a dead teenage girl, and the seemingly straightforward suicide of a local shifty market stall holder, weave in and out of each other, in another beautifully plotted and compelling narrative. As McCoy finds himself inveigled in these cases, not altogether of his own volition, Parks crafts a thoroughly intriguing, disturbing and ultimately immensely satisfying crime story, that exposes the worst and best of the individuals involved, and the creeping tendrils of corruption in society, that keeps the pages a-turning well into the small wee hours.

Once again, Parks immerses us completely in the world of 1970’s Glasgow, with his trademark affection for the city and its inhabitants, perfectly counterbalanced with his unerring exposure of the dark underbelly of this down-at-hell but relentlessly resilient city. As the story pivots between the less salubrious areas and individuals, and those from the better side of the tracks, McCoy has to navigate between the differing worlds in the chase for the truth, and to save a young man from a seemingly certain fate. McCoy is refreshingly unaffected by those who wield power and influence, and his grim tenacity and refusal to kowtow and bend to the will of others he encounters, whoever they may be, is always refreshing and, at times, darkly humorous.

Let’s face it, what else do you need to know about this cracking series? May God Forgive, further cements Parks as an absolute must-read author, and if this hasn’t tempted you to investigate these books yourself, I am flummoxed! Highly recommended as always, and just treat yourself and read them all 🙂 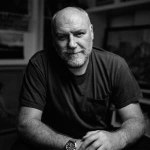 Alan Parks worked in the music business for twenty years before he turned to crime writing. Initially he managed up- and-coming bands before moving into the creative side of the business, commissioning videos, photography and artwork for household names including New Order, All Saints, The Streets and Enya. This background has played a significant role in the creation of Parks’ crime novels. The atmosphere and tone of his novels are partly created by using notebooks full of visual references he makes for each story. The main inspiration for the books comes from wandering around Glasgow itself. #HarryMcCoy Follow on Twitter @AlanJParks

(With thanks to Canongate for the ARC) 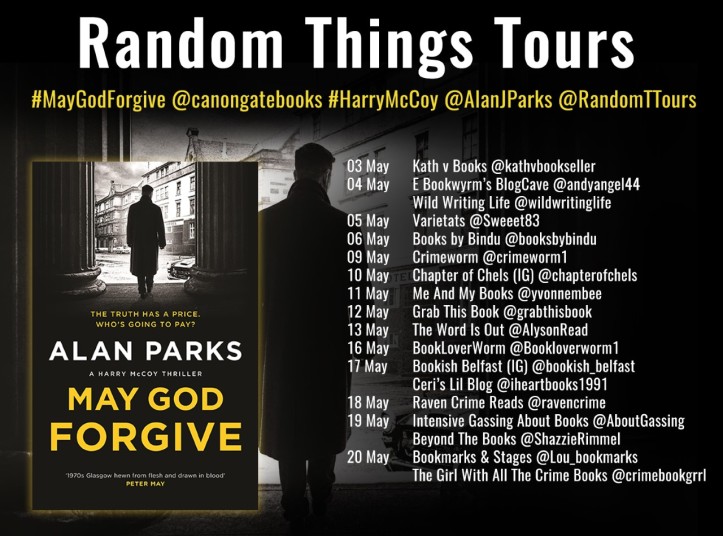