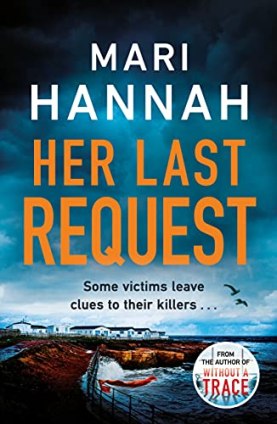 A victim reaches out from the grave to the SIO who will investigate her death. This not what DCI Kate Daniels expects to find concealed at a crime scene. The note contains a last request: ‘Find Aaron’. But is Kate searching for a potential second victim, or a killer?Following the clues, Kate becomes the obsession of her adversary who will stop at nothing to get what he wants. Will she find Aaron before he does?

Another addition to what is hands-down one of the most accomplished, and continually entertaining, crime series on the UK scene. Mari Hannah goes from strength to strength with the DCI Kate Daniels’ series and following on from the breath-taking global investigation in Without A Trace , Hannah has produced, what is to my mind, the most ingenious instalment of the series to date with Her Last Request.

The intricate plotting and slow unfolding of this investigation is completely flawless, showing both innate skill and an incredibly deft touch. The layers of complexity to what, in less experienced hands, could simply be labelled as hunt for a serial killer plays out beautifully, enveloping the reader in a clever and tightly controlled plot, with all the moments of peril, frustration and growing realisation of the extreme danger that this criminal protagonist poses to Daniels and her team. I particularly enjoyed the way that the victim, whose untimely fate opens the book has left a trail of clues and information, pre-empting the involvement of the police in the investigation of their death, and the way that Daniels has to gradually pick her way through the sometimes not entirely evident pointers that these will give her to unveil the killer, and protect those the victim has left behind. It’s not only clever but extremely compelling, perhaps more evident in how pleasingly difficult it was to actually put this one down for any length of time.

Although Kate Daniels is not put through as much of the emotional wringer as in the previous book, there is little doubt that this case presents its own dangers to Daniels on a personal and professional level. Once again, her job intrudes upon her personal space, putting those closest to her at risk, but also having a detrimental effect on the career of her loyal sidekick DS Hank Gormley, which adds a certain frisson to the investigation too. What always shines through, in Hannah’s depiction of Daniels is the way that this professional and dedicated police detective never loses sight of the victims, on whose behalf she seeks to attain justice, “Observing any victim alive when you’d already seen them lifeless always produced a strange sensation, an emotional pull she couldn’t quite explain, even to herself. the bond between the living and the dead seemed all the more poignant in this investigation.” She also refers to herself as “a lone voice in the dark,” summarising neatly the dedication she shows, sometimes against the voices of the powers that be, to single-mindedly attain justice for the voiceless. I was also delighted to see the appearance of another detective, DI David Stone, from Hannah’s other police series cropping up in this one, and the duality and compatibility of their characters, when pitched together during the converging strands of this investigation.

Setting the books in the North East perhaps influences my enjoyment to a greater degree, and Hannah balances perfectly her depiction of not only the rural bleakness of where the victim is discovered, but also giving the reader a clear depiction of the city of Newcastle itself- lively and pulsating, but with the inevitable criminal underbelly that lurks behind the bright lights of the city. Coupled with the ingenuity of the plotting, and Hannah’s always engaging characterisation, I think you can surmise that I really enjoyed Her Last Request. Highly recommended as ever, and already savouring the prospect of the next one to come. 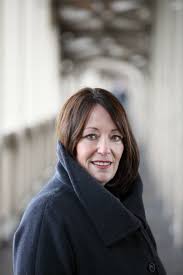 Multi-award winning Mari Hannah is the author of the Stone & Oliver crime series, the Ryan & O’Neil series and the DCI Kate Daniels series. In July 2010, she won a Northern Writers’ Award for Settled Blood. In 2013, she won the Polari First Book Prize for her debut, The Murder Wall. She was awarded the CWA Dagger in the Library 2017 as the author of the most enjoyed collection of work in libraries. In 2019, she was awarded DIVA Wordsmith of the Year. In that same year, Mari was Programming Chair of the Theakston Old Peculier Crime Festival. In 2020, Mari was named as DIVA ‘Wordsmith of the Year’ and won Capital Crime’s ‘Crime Book of the Year’ award.

She lives in Northumberland with her partner, a former murder detective.

To find her or see where she’s appearing, visit her events page at: marihannah.com or follow her on Twitter @mariwriter.

(With thanks to Orion Books for the ARC)