Keeping on top of the family funeral directors’ and private-investigation businesses is no easy task for the Skelf women, and when matriarch Dorothy discovers a human foot while walking the dog, a perplexing case presents itself with potentially deadly results. Daughter Jenny and grand-daughter Hannah have their hands full too: The mysterious circumstances of a dying woman lead them into an unexpected family drama, Hannah’s new astrophysicist colleague claims he’s receiving messages from outer space, and the Skelfs’ teenaged lodger has yet another devastating experience. Nothing is clear as the women are immersed ever deeper in their most challenging cases yet. But when the daughter of Jenny’s violent and fugitive ex-husband goes missing without trace and a wild animal is spotted roaming Edinburgh’s parks, real danger presents itself, and all three Skelfs are in peril…

Having previously reviewed both A Dark Matter and The Big Chill, there was a heady excitement in the Raven’s nest to read The Great Silence, and catch up with the trouble plagued Skelf clan again. It’s always tricky reviewing another book in a series, when you have seriously waxed lyrical about the previous two, and all the elements that you waxed lyrical about totally define the next book too. Also with the news that Johnstone has now committed to two more books in the series, this reviewing lark isn’t going to get any easier. So the burning question is, was I intrigued, dazzled and moved by this one? Read on…

What I love about each  book in this series is how each of the Skelf women, grandmother Dorothy, mother Jenny and grand-daughter Hannah emerge from the metaphorical bat cave of a funeral home to confront evil and seek justice, in the form of more sensibly dressed superheroes. Seriously though, as each woman takes on the angst and potential danger of their individual investigations, some on behalf of others and some on an infinitely more personal level, we are once again struck by the fraternity of these women, and the unstinting loyalty to each other, their friends and those they seek to help. Not in that whole chocolate box schmaltzy nonsense, but with a toughness and gruffness that has been shaped by their lives and relationships up to this point, and with close attention to their own particular definitions of loyalty and morality and how this defines  their behaviour and actions.

Although linked by blood, Johnstone is careful to keep each of them distinct in their own identities, and as much as they themselves seek to navigate their own path, these are three women cut very much from the same cloth despite appearances. There is frailty and insecurity within all of them, but this is very much counterbalanced by tenacity and grit, that only heightens our perception of them as real women, and the steely strength and determination that lies beneath makes them incredibly useful allies to those who seek their help. I love the way that men are so on a sliding scale of likeability in this book, either characterised as fairly vapid, ineffectual or unhinged, like Dorothy’s police officer beau, or the frankly head-the-ball ex husband of Jenny’s who is destined to give the poor woman no peace of mind while he remains at large. To be honest her recent ex-boyfriend is a bit of a wet one too, but you get my drift. They are like perfect representations of what is best and worse about the male species, and are completely eclipsed by the author’s joyous band of female characters.

If you took all the individual strands of this story and set them side by side on a piece of paper, aliens, big cats, dodgy embalmers, a gigolo and incest amongst others, you would be forgiven for thinking you had stumbled into a Will Carver book by mistake. But no. As much as a couple of the investigative strands are a little out there, they actually do have the reader thinking, well, that could happen and what if that did happen? Who wouldn’t want a personal communication from the depths of space? Even if it’s only to tell us to ground Branson and Bezos? Who wouldn’t want a perfect taxidermy cat with feathered wings? But anyway, joking aside, as much as I found myself in a little bit of suspension of disbelief at the beginning, I warmed to the strangeness of these tales, and how as the connections fostered between them, brought everything together, with Johnstone’s smattering of extreme peril and personal loss that have peppered the books so far. As always there are serious themes addressed throughout the book of death, grief and betrayal, all underscored by his consistent theme of how fragile is the cord that allows us all to connect with each other and our insignificant place in a sprawling cosmos, perfectly summed up towards the close of the book. “We don’t ever die…we just convert our energy from one form to another, from chemical energy in our bodies to thermal in the crem furnace, to potential energy, molecular, kinetic, subjected to forces from all sides, strong, weak, electromagnetic and gravitational, pulling us apart and together, dancing endlessly through the swirl of creation until the end of time.”

Prior to writing my review for The Great Silence I tweeted that I would struggle to write a review, and could I just say it was feckin’ awesome. It is. My greatest piece of advice to you is that you should read this, and the other Skelf books too. Highly recommended.

Doug Johnstone is the author of eleven novels, most recently The Big Chill, the second in the Skelfs series, which has just been optioned for TV. In 2020, A Dark Matter, the first in the series, was shortlisted for the McIlvanney Prize for Scottish Crime Novel of the Year and the Capital Crime Amazon Publishing Independent Voice Book of the Year award. In 2019, his thriller Breakers was also shortlisted for the prize. Several of his books have been bestsellers and award winners, and his work has been praised by the likes of Val McDermid, Irvine Welsh and Ian Rankin. He’s taught creative writing and been writer in residence at various institutions, and has been an arts journalist for twenty years. Doug is a songwriter and musician with five albums and three EPs released, and he plays drums for the Fun Lovin’ Crime Writers, a band of crime writers. He’s also player-manager of the Scotland Writers Football Club. He lives in Edinburgh. Follow on Twitter @doug_johnstone and visit the author’s website here.

With thanks to Orenda Books for the ARC 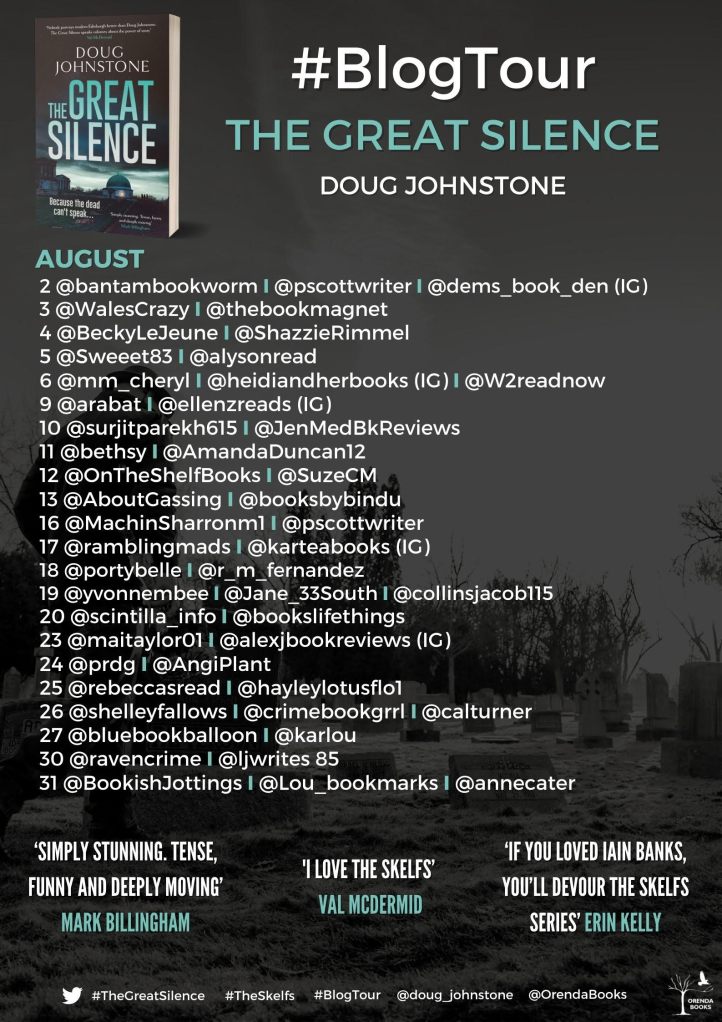