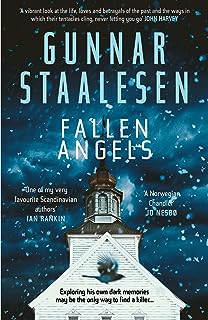 When Bergen PI Varg Veum finds himself at the funeral of a former classmate on a sleet-grey December afternoon, he’s unexpectedly reunited with his old friend Jakob guitarist of the once-famous 1960s rock band The Harpers and his estranged wife, Rebecca, Veum’s first love. Their rekindled friendship is thrown into jeopardy by the discovery of a horrific murder, and Veum is forced to dig deep into his own adolescence and his darkest memories, to find a motive and a killer…

Few things in life are as satisfying than immersing yourself in a new book by the godfather of Norwegian crime writing, Gunnar Staalesen, and once again Fallen Angels, the latest in the Varg Veum investigations, brings a whole host of new delights, and something different to this long running series…

I am in total admiration of writers who undertake to sustain writing an established series featuring the same central character, and particularly Staalesen who always seems to be able to expose different facets to Veum’s character, which are always plausible and gratifying for the follower of this series. What is noticeable about this book, compared to the previous books, is the more noticeable meditative tone, and the feeling of a greater degree of introspection. There are significantly less of the cynical and wryly humorous asides that this character so often employs, and instead there seems to be a greater degree of digging down into his life and motivations, and an incredibly dark denouement that is both full of pathos and very disturbing. This book gives Veum a chance to ruminate on his life more, as individuals he has known since childhood and his formative years begin to have untimely deaths, forcing Veum to reassess incidents from the past, and how they could have led to these current events.

In one noteworthy passage Veum sums up these exact thoughts, “Childhood is a wound that never heals; your youth a poster someone has tried in vain to tear down. All the years you have lived are here, like dirty footprints in the snow behind you. You have left your own chalk-marks on most of the walls in this town and no charlady has bleach strong enough to wash them off completely. And the child you once were, you will never be again.” Consequently, childhood, life, death, love, friendship, loyalty and betrayal are key themes throughout the book, as Veum attempts to track a determined and vengeful killer, but finds himself immersed in loves lost and betrayals uncovered and exposed in this very personal case. There is a much more sombre tone to this book as a whole, and quite intense examinations of the public vs the private in terms of the character’s lives, and the role of the spiritual and religious as time marches on, and age begins to become a greater concern in Veum’s mind, intensified in the series of murders of his peers, a couple of misjudged entanglements, and also as an important connection is rekindled from the past.

Once again, Staalesen works wonders for the Norwegian tourist board with his precise and descriptive portrayal of Bergen- both the good and the not so good- and its surrounding landscapes, so as he traverses the country in search of vital clues, the visual representation of these locales is always imbued with clarity and atmosphere. Likewise, there is an almost complete bibliography of the Norwegian music scene from the 1960s onwards, which adds an other layer of interest to the book, and perhaps more starkly as he charts the musical journey of the fictional band, The Harpers, shows the highs and lows of life in the spotlight, the drugs, the groupies, and more brutally how some continue to try and hold on to fame beyond the time they should, when the glory years are indeed well behind them. The central investigation is very deeply imbedded in the events from this period of the band’s success, and like water circling a drain, Veum slowly closes in on the disturbing goings-on before their parting of the ways.

As I said, there is a much more meditative tone to Fallen Angels overall, although Staalesen does seem to get an inordinate amount of pleasure from putting Veum through the emotional wringer fairly consistently in the series. I liked the dark brooding tone to this one, with the growing self awareness Veum gains from revisiting his formative years, his appreciation of his own upbringing, and how this has shaped him on a moral and spiritual level, in contrast to the morally dubious and in some cases, really dislikeable figures from his past. Another satisfying addition to this already excellent series and who knows what awaits Varg Veum in his next investigation… Recommended.