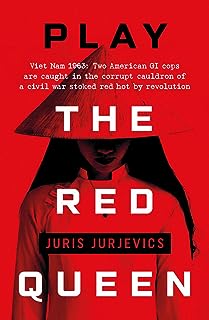 Vietnam, 1963. A female Viet Cong assassin is trawling the boulevards of Saigon, catching US Army officers off-guard with a single pistol shot, then riding off on the back of a scooter. Although the US military is not officially in combat, sixteen thousand American servicemen are stationed in Vietnam ‘advising’ the military and government. Among them are Staff Sergeant Ellsworth Miser and Sergeant Clovis Robeson, two army investigators who have been tasked with tracking down the daring killer…

Welcome to the next stop on the blog tour for Juris Jurjevics’- Play The Red Queen, one of a trilogy of Vietnam set novels by this much missed author. Along with The Trudeau Vector and Red Flags, Jurjevic provides a powerful testament to the Indochina conflict, not only with a writer’s eye, but also with having served in the war himself.  This combat experience strengthens the authenticity and realism of his work, making it very reminiscent of the the work of such Vietnam War chroniclers such as Tim O’Brien and Philip Caputo…

What I found particularly impressive about this book was the sheer wealth of detail that Jurjevic injects into the book in a relatively slim page count. Not only does the reader get a real sense of the socio-political life of Vietnam during this period relating to the dictatorial grip of Vietnam’s rulers and the host of global interferences in the day to day life of the country, but also much more besides. There are references to not only the extreme corruption that lays at the heart of society, the influence of the supernatural on the mindsets of the citizens and the undercurrents of tensions on a country divided, and on the cusp of a major conflict. The air is rife with tension, and as a cunning and inventive assassin roams the streets, Jurjevic keeps the reader on a knife edge throughout. Not only does he focus on the powerplays and subjugation impacting on the citizens, and the US military personnel, but he also cleverly weaves in references to life back in America, with the rise of the civil rights movement and the growing unease at America’s involvement in what we now know with hindsight to be a particularly contentious and catastrophic intervention.

There are a wealth of characters in the book, some we get to know up close and personal and some we only view through the yes of others. I particularly liked the two main protagonists, Sergeants Miser and Robeson, who have had to undertake the dubious task of tracking the female assassin stealthily wreaking havoc amongst the military community. Miser in particular is a world weary and cynical individual whose dry humour and pragmatism adds an edge to his character, and endears us to him. As he finds himself negotiating the upper echelons of the American political hierarchy, and keeping ahead of the killer, we get an even greater sense of the corruption and potential power grabs that underscore this volatile situation. He has a little time for a romantic entanglement along the way, which again heightens the undercurrent of the communism vs capitalism ethos of the book, and along with Robeson gets into some very tight and dangerous situations indeed. Along with the references to the civil rights unrest at home, we also see this nicely played out with Miser being white and Robeson black, and how Robeson is often thoughtfully, and not so thoughtfully, excluded from some situations that arise purely due to his skin colour and not his rank.

The book nips along at a good pace with some good action packed set pieces and a satisfyingly violent and almost ethereal final scene. Jurjevic keeps a solid control of the escalating feel of peril, as Miser and Robeson close in on their target, and the contrary influence of others so involved in the central theme of corruption. I must confess that this genre is close to my heart having written my MA dissertation on representations of the Vietnam War in fiction, so it’s likely that I enjoyed Play The Red Queen as an assured representation of this genre. It oozes with realism, is packed with detail, and has a perceptive use of tension and scene setting, bolstered by strong characterisation. Recommended.

(With thanks to No Exit Press for the ARC)