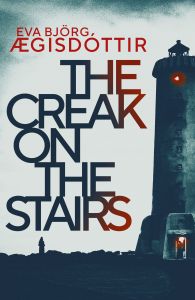 When a body of a woman is discovered at a lighthouse in the Icelandic town of Akranes, it soon becomes clear that she’s no stranger to the area. Chief Investigating Officer Elma, who has returned to Akranes following a failed relationship, and her colleagues Sævar and Hörður, commence an uneasy investigation, which uncovers a shocking secret in the dead woman’s past that continues to reverberate in the present day. But as Elma and her team make a series of discoveries, they bring to light a host of long-hidden crimes that shake the entire community. Sifting through the rubble of the townspeople’s shattered memories, they have to dodge increasingly serious threats, and find justice, before it’s too late…

It’s always good to discover another member of the Icelandic crime writing stable, and if you have previously enjoyed Ragnar Jonasson or Yrsa Siggurdottir, there is much to enthral you here. The Creak On The Stairs from Eva Björg Ægisdóttir is the first of a series introducing a new female detective, and displays all of the recognisable hallmarks of Icelandic crime fiction…

Usually when I review I tend to focus on one aspect of the book which totally hooked me, and in this case the overriding impression I was left with was that of location and atmosphere. After a short sojourn in Rekjavik, Elma returns to her hometown of Akranes, and we are instantly immersed in this dark, elemental setting, separated by a stretch of water from the capital city, and Ægisdóttir builds the character of the town and its surrounds with as much care and precision as the plot and characterisation too. The whole book is enveloped by an intense feeling of claustrophobia and foreboding, which is mirrored by the wild and tempestuous weather, and the changing moods of the sea. The descriptive elements of the book are extremely powerful, and really allow the reader to picture each individual setting, and to feel the mercurial changes wrought upon it. From the sinister old lighthouse to the roiling shoreline it rests upon, our feeling of darkness and foreboding is constantly manipulated and shaped by this aspect of the book.

Chief Investigating Officer Elma is at the heart of the book, and the gradual reveal of her reasons for returning to Akranes, reconnecting with her family and her developing relationship with her police colleagues are perhaps the most interesting aspects of her character. As the investigation she is bound up with is fairly linear, Ægisdóttir has more opportunity to establish this character, and her cohorts as a base to build further investigations on. Although I question the speedy intensity of one of her new relationships, which was a little cliched, there was a solid building of camaraderie and cooperation established with the team Elma is now part of. Aside from Elma, I felt that the author used her female characters effectively to address some powerful themes of control, subjugation and abuse, and one older character in particular seemed to embody the meek acceptance that builds into a simmering and then violent resentment was very well realised indeed.

Using a split timeline to recall the experiences of a young abused child Elisabet, with her experiences as an adult is an effective trope of the book. As we see how her character develops, and her increasingly physical outbursts, little wonder that these events as a child so fully shape her as a woman. The passages that recount her childhood are an emotive mix of malevolence and pathos, and in the closing chapters as the murderer is eventually unmasked, it becomes increasingly clear that a whole web of lies and deceit have also blighted her entire life. Although the plot had a sedate pace, Ægisdóttir does strive to hold the reader’s interest, and there were a couple of satisfying plot twists to change our perspective on some of the characters we encounter.

With its claustrophobic intensity and a measured but powerful depiction of female oppression, I think The Creak On The Stairs was a solid start to a series, with plenty of opportunity to grow and develop the central female police character. Another assured translation by Victoria Cribb, and a real sense of affiliation with, and appreciation of the location used, by Eva Björg Ægisdóttir herself, there is much to enjoy here. Recommended.