DI Gayther and his rookie colleague DC Carrie have been assigned a new caseload. Or rather, an old one: cold cases of LGBTQ+ murders dating back to the 1980s and beyond. Georgia Carrie wasn’t even born when the notorious serial killer began his reign of terror across the East of England. Roger Gayther was on the force that failed to catch him and remembers every chilling detail. Now, after all these years, there’s a sudden death featuring The Scribbler’s tell-tale modus operandi. Can Gayther and Carrie track the murderer down and bring him to justice before the slaughter starts again?

I’ve had the pleasure of reviewing two of Iain Maitland’s previous books, Sweet William and Mr Todd’s Reckoning, both of which impressed me greatly with Maitland’s ability to draw the reader into seemingly ordinary lives with a real darkness lurking beneath. Consequently, being offered the chance to review The Scribbler, the first of a projected series was hard to resist…

Aside from the darker content of the book, which I will come to later, the real hook with this one is how character driven it is. Maitland establishes the relationships between his main police protagonists incredibly quickly, instantly drawing the reader into the working relationship of the older and greyer DI Roger Gayther and his younger colleague DC Georgia Carrie. It was hugely satisfying to feel an instant camararderie between them, and the teasing nature of their interactions, denoted by the tendency of both to slightly mock the other afforded by their relevant age and experience. Hence, Gayther at times seems somewhat of a dinosaur when it comes to technology and youth culture, but with a wealth of knowledge, and Carrie is humorously immune to his outdated showbiz references, a little naïve with her keenness and her slightly gung-ho attitude, but also incisive. It was incredibly refreshing to encounter a detective duo not driven solely by emotional trauma, and there was a lightness of touch about Maitland’s depiction of them, that leads to a real sense of reader empathy with them as the plot progresses. Hold that thought, as there is real trouble ahead. Bolstered by a couple of wet-behind-the-ears trainee detectives, who Maitland hints will have a greater role as the series progresses, Gayther and Carrie were absolutely central to my enjoyment of the book.

Just dwelling on character a little bit longer, I was also impressed by the roundness and depth that Maitland affords to his bad guy of the piece, the serial killer himself. Whilst trying desperately to avoid any spoilers, what I will say is that the author avoids those terribly cliched black and white depictions of a monster in human form, and instead builds up a picture of a damaged soul with deep psychological disturbance, that makes his actions as clear to us, as plainly as his own damaging motivation. There is a core of morality at his centre, and as we gain insight into his familial connections and his upbringing, we find our perception of him changing and, dare I say, softened. In common with Maitland’s previous books, his characters are exceptionally well-defined with surprising undercurrents and reveals that cause us to assess and reassess them as the story unfolds.

With the book centring on cold cases, and more specifically murder cases and disappearances involving LGBTQ+ victims, Maitland has successfully ploughed a new furrow. I have certainly read crime novels involving LGBTQ+ victims and detectives, but none that combine these additional elements. As we bear witness to a catalogue of failings and oversights on the original cases, where crimes of this sort were invariably not afforded the same time and resources as others, we begin to appreciate the small steps that the police have made since then to rectify these prejudices. Gayther and Carrie hold no such prejudice, and despite some internal pressure begin to unravel the complexities of these cases, the poignant secrecy and shame of the victims, and the detectives’ progress towards the apprehension of the perpetrator himself. The Scribbler is well-paced, engaging and punctuated by both episodes of extreme pathos, and by turns, unexpected humour, leading to a compelling and incredibly satisfying crime read. Watch out for that ending which will bite you on the nether regions… Highly recommended.

(With thanks to Saraband Books for the ARC)

Missed a post? Catch up with the blog tour at these excellent sites: 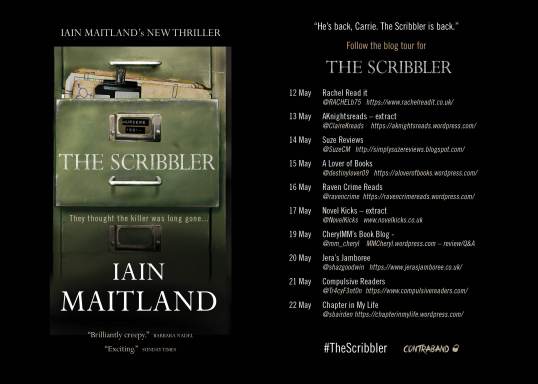