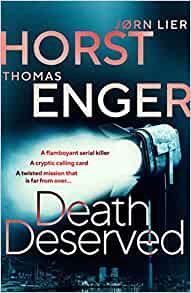 Oslo, 2018. Former long-distance runner Sonja Nordstrøm never shows at the launch of her controversial autobiography, Always Number One. When celebrity blogger Emma Ramm visits Nordstrøm’s home later that day, she finds the door unlocked and signs of a struggle inside. A bib with the number ‘one’ has been pinned to the TV. Police officer Alexander Blix is appointed to head up the missing-persons investigation, but he still bears the emotional scars of a hostage situation nineteen years earlier, when he killed the father of a five-year-old girl. Traces of Nordstrøm soon show up at different locations, but the appearance of the clues appear to be carefully calculated evidence of a bigger picture that he’s just not seeing. Blix and Ramm soon join forces, determined to find and stop a merciless killer with a flare for the dramatic, and thirst for attention. Trouble is, he’s just got his first taste of it…

In a stroke of genius, two of the most recognisable and talented Norwegian crime writers, Thomas Enger and Jorn Lier Horst have joined forces to produce Death Deserved, and what a collaboration it is.  Centring on a series of murders targeting well known personalities, the story ( the first of a series) sees a mirroring of the writer’s own specialities in their crime fiction. Jorn Lier Horst is an ex-policeman, author of the hugely successful William Wisting series so naturally the joint main protagonist is a detective, Alexander Blix. Equally, Thomas Enger known for the compelling series featuring a journalist, Henning Juul, brings his knowledge and familiarity with the world of media to Blix’s co-protagonist journalist Emma Ramm. With both writers having such an accomplished pedigree in crime fiction writing, the joining up of their individual talents is exceedingly effective, and consequently what they have produced is an extremely compelling, clever and fascinating thriller. Having recently read both Enger’s Inborn and Horst’s The Cabin, I was interested to see how each writer’s individual style was so evident in this collaboration, being highly reflective of both their talents in creating credible and engaging characters, setting themselves apart from the normally slightly meandering tendency of Scandinavian crime fiction, and injecting a real sense of pace and excitement into the narrative and development of the plot.

Haunted by a shooting incident in the line of duty, and having a somewhat rootless and static career, Blix exhibits traits that we love in our police protagonists. He seems to exist under somewhat of a black cloud, with an estranged wife and a daughter he is currently viewing through the media as she takes part in the popular Worthy Winner show, the Norwegian equivalent of Big Brother. Slightly morose, but intuitive and imbued with a sense of morality and determinedness, Blix is an instantly empathetic and likeable character. As the investigation continues and time becomes of the essence for some kind of breakthrough, his path crosses once again with journalist Emma Ramm with whom, unbeknownst to her, he shares a personal history. As he begins to feed her information pertinent to the investigation, thus begins a flowering of an effective and, at times, perilous professional connection, which becomes absolutely crucial in the pursuit of a seemingly untraceable and ruthless killer.

I particularly like the character of Emma Ramm who possesses a confidence and doggedness as a journalist that puts some of her male peers to shame. Her quick intelligence and intuition are stretched to the max in this troubling case, but is exactly these qualities that Blix comes to rely on strongly as their interactions lead to significant turning points tracking the perpetrator and even more so as certain things develop in their hunt. No spoilers here. What I also like is the way that her natural confidence is underscored by a certain vulnerability below the surface, due to a condition which any young woman would find difficulty in coming to terms with. This adds a real emotional depth to her, and compounded by her growing realisation of the important part that Blix had played in her life, leaves great possibilities in developing her, and by extension his, characters even further.

Having referenced earlier the tendency for rather drawn out plotlines in some Scandinavian crime fiction, I very much felt the pace and energy of this one as being more similar to some of the best of the American crime writers. With a perfectly weighted balance of hide and reveal, I found the plot development and truncated chapters made this a book which was difficult to put aside, as everything tempted you to keep on reading. With the increasing body count, some withering observations on the cult of celebrity, some devilish twists, and a couple of satisfyingly surprising red herrings along the way, I was caught on the back foot more than once. What a great ending too. As a crime reader I could ask for nothing more…

Definitely one to add to your wish-lists and guaranteed to keep you reading long after the big light needs to be turned off! Highly recommended.