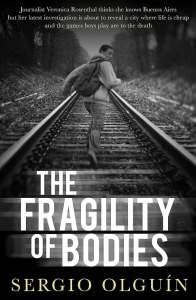 When journalist Veronica Rosenthal hears about the suicide of a local train driver who has jumped off the roof of a block of flats, leaving a suicide note confessing to four mortal ‘accidents’ on the train tracks, she decides to investigate. For the police the case is closed (suicide is suicide), for Veronica it is the beginning of a journey that takes her into an unfamiliar world of grinding poverty, junkie infested neighborhoods, and train drivers on commuter lines haunted by the memory of bodies hit at speed by their locomotives in the middle of the night. Aided by a train driver informant, a junkie in rehab and two street kids willing to risk everything for a can of Coke, she uncovers a group of men involved in betting on working-class youngsters convinced to play Russian roulette by standing in front of oncoming trains to see who endures the longest. With bodies of children crushed under tons of steel, those of adults yielding to relentless desire, the resolution of the investigation reveals the deep bonds which unite desire and death…

Right, where on earth do I begin, to get across to everyone how intensely, sublimely brilliant The Fragility of Bodies is? A book shot through with painful truths and gritty realism, and with the ability to put its reader through a whole gamut of emotions with its pared down prose, perceptive exploration of the human compulsion to make connections, and larger themes of trust, exploitation and social injustice. This is a huge, important book hiding behind the deceptively simple label of an Argentine noir thriller, but has much to say about the nature of human relationships, and the power and exploitation of the few on the lives of the many…

With such a self assured, dogged, yet emotionally turbulent central character as journalist, Veronica Rosenthal, I was instantly entranced by her. She sets about her investigation into the worrying trend of suicides on local railway lines, with verve and energy; a verve and energy that also extends to the more base needs of her character, and the mutual seduction that occurs in the course of her investigation. She is flighty and independent, in relation to her friends and siblings, but she has a real strength of character and essence of self control, that her peers can only aspire to. Not only does Olguin put his readers through the emotional mangle, but Veronica is tested constantly in her pursuit of the truth behind the pattern of suicides occurring on train tracks of late, sucking her into a world of bribery and exploitation that will prove dangerous in the extreme. I can truthfully say that she is one of the most well-realised, compelling and authentic female characters that I have encountered for a long time, and this mix of tenacity and bravery, is beautifully tempered by the more impulsive, reckless and passionate side of her nature, be it in her professional or personal life.

The breadth of crime fiction set in South America has been a recent revelation to me, and Olguin naturally captures the grinding poverty, misplaced optimism, and dangerous existence of the lower classes of Buenos Aires society. Young boys believe that football is their ticket out of the slums and the path to riches, but putting them squarely into the path of those that would exploit them, and such is their desperation to escape the clutches of poverty and to help their families, or just to feel valued that they are easily coerced into the dark activities of the adults in whom they trust. Olguin perfectly captures the conflicts that arise in these young boys, lured into a dangerous form of ‘chicken’ to satisfy the men who place bets on these youngster’s bravery and ultimately survival, with the lure of a hundred pesos.

The world of these boys is unflinchingly depicted by Olguin, capturing the deprivation of the neighbourhoods they live in, the struggles of their families, and the thin line that exists between survival and criminality in the dangerous world of the favelas. Olguin’s depiction of this world is written with sharp clarity appealing to the reader’s senses, and which cannot fail to move the reader’s emotions too, but what is also detectible is the thin veneer of hope that lies behind the most meagre of lives, the feeling that not all is lost, and that a sense of morality can breach the divides Olguin so truthfully depicts. As long as journalists like Veronica, and honest citizens seek to expose the morally bankrupt despite the risks, there can always be hope, despite the inherent danger in society of those in positions of power.

The Fragility of Bodies has rocketed into my best books of the year, and all I can say to Sergio Olguin and his wonderful translator Miranda France, is that I am already salivating for the next in the series to be translated. This book shocked, moved and completely absorbed me from beginning to end, and think this will leave a few of my future reads trailing in its wake. Gritty, beautifully prosaic, and intensely moving, I cannot do justice to the power of this book, which moves the emotions, sparks the social conscience, but pays heed to the need of a thriller to excite and entertain us too, with a truly compelling central character. Highly recommended.

(With thanks to Bitter Lemon Press for the ARC)