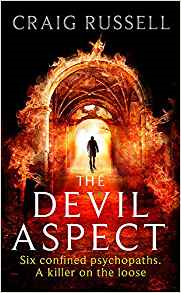 1935. As Europe prepares itself for a calamitous war, six homicidal lunatics – the so-called ‘Devil’s Six’ – are confined in a remote castle asylum in rural Czechoslovakia. Each patient has their own dark story to tell and Dr Viktor Kosárek, a young psychiatrist using revolutionary techniques, is tasked with unlocking their murderous secrets.
At the same time, a terrifying killer known as ‘Leather Apron’ is butchering victims across Prague. Successfully eluding capture, it would seem his depraved crimes are committed by the Devil himself.
Maybe they are… and what links him with the insane inmates of the Castle of the Eagles?

At the close of the book, Craig Russell has included a small piece on why and how he chose to write this, and the depth of research he undertook in its creation. With its sublime mix of history, both societal and psychoanalytic, folklore, murder and mental disturbance, this is a real edge of your seat read, so settle back and find out why…

The book follows the progress of a grisly murder case, where a woman is eviscerated in the same style as Jack The Ripper’s victims some decades earlier. As the murderer stalks the street of Prague, a connection is made between the perpetrator the dark stories concerning the inhabitants of a mental asylum, and the apocryphal history of the haunted Hrad Orlu castle itself. Russell sucks us in completely to this ever more sinister tale, where we bear witness to the escalating violence of the killer in Prague, and the gradual unveiling of the Devil’s Six incarcerated in the asylum, and their uniquely horrific stories. However, what sets this apart from a slightly creepy horror story, are the fascinating strands of narrative that Russell fleshes the story out with, so we also get an insight into the heightening political tensions in both Czechoslavakia and Europe, the differing schools of thought regarding the treatment of mental disturbance, some truly creepy stories arising from Czech folklore, and a stark reminder of the tissue thin boundaries between sanity and insanity. Not only is this a skilfully rendered and haunting story of madness and murder, but the incorporation of these other facets make for an admittedly eerie but utterly fascinating read as we are so immersed in this period, and bear witness to the slowly evolving revolution in the treatment of the insane, continuing with, or challenging the work of Freud and Jung.

The characterisation in The Devil Aspect is top notch, and I really enjoyed the way that Russell toys with our perceptions of who is good or evil. Everyone is to some degree or another touched by madness, be it in their professional capacity, their interactions with the patients themselves, in the darkest corners of their own psyches sparked by events in their formative years, or the burgeoning of the present itself and the increasing hostility and restlessness sweeping across Europe. I am reluctant to dwell too much on individual characters themselves, as I really want you to be as surprised and shocked as I was as Russell slowly shines a spotlight on each, incorporating more than a few ‘bloody-hell-I-didn’t-see-that-coming-moments’ as he delves into their psyches. Suffice to say your sympathies and belief in some of the characters may be sharply turned on its head as you get more and more involved in this one.

So gird your loins everyone, as this book is guaranteed to haunt your dreams and undoubtedly some of your waking hours too. It’s clever, skilfully blending the worlds of science, detection and superstition, populated with an intriguing set of characters, and Russell uses the twin locations of Prague, and the remote forest setting of the Hrad Orlu asylum to the creepiest nth degree. Thoroughly enjoyed this one, so can not be anything less than highly recommended.

(With thanks to Constable for the ARC)