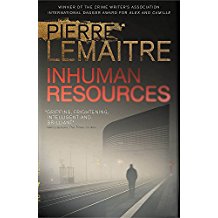 Alain Delambre is a 57-year-old former HR executive, drained by four years of hopeless unemployment. All he is offered are small, demoralizing jobs. He has reached his very lowest ebb, and can see no way out. So when a major company finally invites him to an interview, Alain Delambre is ready to do anything, borrow money, shame his wife and his daughters and even participate in the ultimate recruitment test: a role-playing game that involves hostage-taking. Alain Delambre commits body and soul in this struggle to regain his dignity.  But if he suddenly realised that the dice had been loaded against him from the start, his fury would be limitless. And what began as a role-play game could quickly become a bloodbath…

As well as producing one of the finest crime series, and a collection of unique standalones, Lemaitre once again demonstrates the reach and depth of his literary skill in this dark, cynical and twisted tale, which provides a perfect allegory of the daily struggle of the downtrodden individual against the power of the few…

Quickly, I was struck by how Lemaitre’s use of the absurd in the book, mirroring in style the venerable Pascal Garnier, becomes a powerful literary tool to cast an unflinching glare on the world of work, business and exploitation in French society, but by extension in every culture. By focussing on an older protagonist such as Alain Delambre, we feel the frustration and subjugation that he experiences, nearing the twilight years of his working life, and the disempowerment he rages against as he is unceremoniously thrown on the employment scrapheap. This is the cue for Lemaitre himself to rail against the exclusion of older workers, and the hugely depressing statistics concerning employees and unemployment, which pepper the book. Delambre is an angry man and incensed by the demeaning of his worth, so he formulates a plan: a plan that has severe implications for himself and his loving family. The extreme measures that Delambre undertakes, that dishonour both him and his family are shown to be symptomatic of a larger problem in society and Lemaitre addresses these with a razor sharp and cynical eye.

However, before you begin to think that this sounds like a fairly linear tale of a desperate man taking desperate measures to gain a foothold back in the world of employment, Lemaitre turns the tables on us, and in no short order we have a hostage crisis, embezzlement, computer fraud, a seriously ticked off security operative, violence, a family in disarray, a car chase, a court case and more. Taken in its entirety, Lemaitre beautifully paces moments of extreme pathos, and a general headshaking at the world of big business, with episodes of such verve and tension that add an energy and vigour to this seemingly mundane tale of the little man’s struggle in the face of unrelenting financial and emotional pressure. I loved the increasing confidence of Delambre as he formulates his plan to turn the tables, and the gradual shedding of his previously held morality to achieve his aim, despite the extraordinary sense of betrayal experienced by his wife and daughters. He proves with every fibre of his being that you can teach an old dog new tricks, and if these tricks happen to land him in a whole heap of trouble, he proves himself unafraid to take the chance, despite some unwelcome consequences.

Once again the seamless translation by Sam Gordon, picks up all the elasticity of Lemaitre’s manipulation and use of language, and heightens the perfect structuring and narrative pace that builds tension, and ratchets up the sense of human frailty and newly acquired resilience that Delambre embodies. I found this a hugely satisfying read, for not only the cynical yet pertinent appraisal of the exploitative world of business and its effect on older workers, but also as a genuinely pacey and endlessly surprising thriller as Delambre’s life appears to descend into violent freefall. Smartly done, and as a thriller with a difference, highly recommended,

(With thanks to Maclehose Press for the ARC)

Catch up with the Inhuman Resources #BookBlast at these excellent sites: 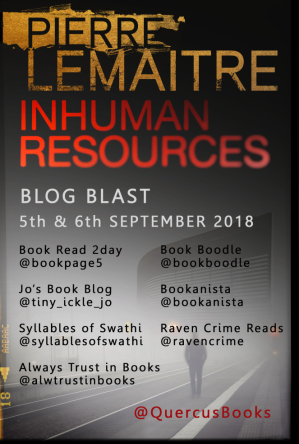