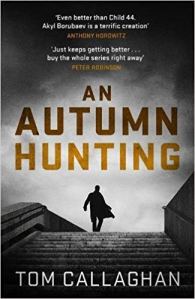 No sooner has Akyl Borubaev been reinstated as an Inspector in the Bishkek Murder Squad than he’s suspended for alleged serious crimes against the state.After an attempted assassination of a prominent minister goes spectacularly wrong, Akyl is a fugitive from his former colleagues and involved with one of Kyrgyzstan’s most dangerous criminals.

On the run, caught up in a illegal scheme that can only end badly, it’s time for Akyl to take a stand for everything he believes in…

So in a blink of an eye we have reached the final instalment of Tom Callaghan’s exceptional Kyrgyzstan quartet featuring Inspector Akyl Borubaev, that all began with the brilliant A Killing Winter , and took us through A Spring Betrayal, and A Summer Revenge…

I don’t usually pay much attention to the use of epigraphs before the book proper, but in this case the quote from Chingiz Aitmatov, “The hardest thing for anyone is to be a human being every day” is entirely appropriate for the emotional wringer that Borubaev goes through during the course of this one. Obviously, being the last book of the cycle, the story is incredibly influenced by events of previous books, but rest assured you are kept firmly in the loop, as to who, what, where and how Borubaev has reached this precarious state, both professionally and emotionally. You never shake the sense that Borubaev is a pawn in a much larger game, not always voluntarily, and in a similar style to the sub genre of East German crime thrillers, there’s always the sinister shadow of other security services seeking to control and manipulate him. Borubaev is a superbly constructed character being the archetypal lone wolf, but being neither utterly corrupt nor totally moral. This book, perhaps even more so that the others, sees him playing a dangerous game, inveigling himself with a ruthless criminal with an illegal mission in Bangkok, and appearing to burn all his bridges in his homeland too. As usual, he navigates some very choppy waters indeed, with the requisite amount of physical fear and violence that Callaghan so precisely and excitingly punctuates his books with, and as the book spirals to one of the best closing chapters I have read for some time, this is real edge of the seat stuff throughout. The book is also littered with little flashes of dark, mordant humour and precisely placed barbs aimed at the State, complete with a knowing raise of the eyebrow.

As he uses his natural guile to stay one step ahead, Borubaev’s character is such that we are also allowed to witness moments of extreme emotion and natural sympathy, particularly in his intermittent dalliance with the femme fatale figure of tough hitwoman Saltanat, when a new development in their relationship is revealed- a development that brings his previous marriage back into sharp focus and analysis. Throughout the series his affair with the totally self contained, clinical Saltanat has been an interesting diversion in the unrelenting grimness, uncompromising violence and double crossing that gives the real punch to the writing, and I was curious to see what would happen with them, being such unlikely bedfellows. Callaghan does not disappoint, and instead of the usual schmaltz-laden interludes that ‘tough guys’ have, there is a real depth of emotion and extreme pathos to the hurdles in their relationship.

Once again, Callaghan uses the grey, bleak feel of Kyrgyzstan, both in terrain and in the socio-political sense, to full effect, focussing on the poverty, social deprivation and corruption rife in society. When the action shifts to Bangkok, these themes are revisited as Borubaev witnesses the highs and lows of life in this pulsing city, rich on the surface, but with an underbelly of poverty and extreme exploitation. There is a real depth and richness to Callaghan’s depiction of both locations, and how the problems of an individual state, are all too often repeated and visible in others, most notably the twin evils of drugs and sexual exploitation, and those who profit from them.

I thought this book was a sublime addition to the previous three, and a fitting conclusion to the series, leaving a little catch in the throat, but as a reader a genuine feel of having read a truly satisfying sequence of books. The locations, characterisation, social and political detail, and genuine page-turning excitement are a credit to Tom Callaghan’s writing, and I have enjoyed (and recommended widely) every book. An Autumn Haunting is no exception.  Highly recommended.

(With thanks to Quercus for the ARC)