I am going to don my bookseller hat here, and say with some confidence that if you like the sound of one of these beauties, I can pretty much guarantee that the other book will appeal too.

Go on. You know you want to…

DS Alexandra Cupidi has done it again. She should have learnt to keep her big mouth shut, after the scandal that sent her packing – resentful teenager in tow – from the London Met to the lonely Kent coastline. Murder is different here, among the fens and stark beaches. The man drowned in the slurry pit had been herded there like an animal. He was North African, like many of the fruit pickers that work the fields. The more Cupidi discovers, the more she wants to ask – but these people are suspicious of questions. It will take an understanding of this strange place – its old ways and new crimes – to uncover the dark conspiracy behind the murder. Cupidi is not afraid to travel that road. But she should be. She should, by now, have learnt…

Having made the acquaintance of DS Alexandra Cupidi some time ago in The Birdwatcher , a wonderfully atmospheric thriller set against the backdrop of the bleak coastline of Dungeness, prepare to be completely absorbed as she makes her return in Salt Lane. Not only is this a well plotted and compelling police procedural, once again using this particular landscape to its full brooding and slightly sinister effect, but Salt Lane reveals itself to be so much more.

When you cast your eye over the backlist of William Shaw, comprising of his evocative 60s series, and the aforementioned The Birdwatcher, one cannot help but be struck by the skill of his storytelling, and the strength of his characterisation. As well as unfailingly producing absorbing, moving and carefully constructed police procedurals, Shaw also uses either the zeitgeist of the period, or the locations to envelop the reader completely in the atmosphere he seeks to produce. In Salt Lane the desolate, but rawly beautiful, locale of Dungeness once again reveals itself as a centrifugal force in the book, being either a place of safety or danger in equal measure, but also effectively acting as a prism for the emotional state of both Cupidi and her troubled teenage daughter, Zoe. As Zoe seeks to deal with her emotional pain and seeks solace from the landscape, also unwittingly leading herself into the heart of her mother’s investigation, Cupidi herself finds herself at times waging an emotional and physical battle with the unique geography of the area, and the murders that occur within its boundaries.

Taking a backward step for a second, I can’t emphasise enough the weight of emotion, and more importantly the completely plausible emotion that Shaw injects into his trinity of female characters, Cupidi, Zoe and Cupidi’s mother Helen, who will be recognisable to some readers from Shaw’s previous books. I was absolutely blown away by how succinctly and honestly Shaw captured the internal and external emotional lives of these women, as they navigate their differences and similarities in the course of the book. The tension and moments of conflict are balanced beautifully with moments of epiphany in their personal relationship with each other, and the scenes featuring these three exceptional characters are a joy to read, feeling raw, true and suffused with realism. I must confess that I don’t read much ‘women’s fiction’ as that which I have encountered always has a slightly mawkish feel in its depiction of ‘women’s experience’,  but I was held spellbound by the resonance of these characters in my interpretation of how women truly are, and how that which separates them, can be seen to actually bind them together more than they initially feel.

As for the plot itself, Shaw is given free reign to expose the worst ills of a Britain caught in a monstrous wave of nationalism and post-Brexit turmoil. Against the Kent location of the book, Shaw weaves a disturbing police investigation into an unflinching and, most importantly, objective appraisal of immigration and exploitation, that boils the blood, and tugs at the heartstrings in equal measure, depending on your political viewpoint. Without resorting to soapbox declarations on the state of Britain, Shaw holds a mirror up to the conflicting sides of the immigration issue, whilst keeping the book solidly on track as a crime thriller. Consequently, Salt Lane is never less than a wonderfully multi-layered contemporary thriller, replete with the highest calibre characterisation, and a looming feel of unease. Highly recommended.

(With thanks to Riverrun for the ARC) 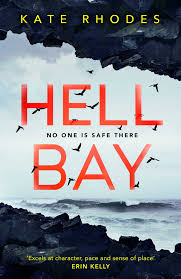 DI Ben Kitto needs a second chance. After ten years working for the murder squad in London, a traumatic event has left him grief-stricken. He’s tried to resign from his job, but his boss has persuaded him to take three months to reconsider. Ben plans to work in his uncle Ray’s boatyard, on the tiny Scilly island of Bryher where he was born, hoping to mend his shattered nerves. His plans go awry when the body of sixteen year old Laura Trescothick is found on the beach at Hell Bay. Her attacker must still be on the island because no ferries have sailed during a two-day storm. Everyone on the island is under suspicion. Dark secrets are about to resurface. And the murderer could strike again at any time.

With all the claustrophobic feel of a locked room mystery, and introducing us to a little fictionally represented corner of the world, Hell Bay proves to be a real treat, and on the back of Kate Rhodes’ brilliant series featuring Alice Quentin, this introduction to a new character DI Ben Kitto can only augur well for books to come…

I know I’m always going on about location in the books I read, but I genuinely think that if,  as a reader,  you can’t imagine this all too crucial element to a story in a tangible sense the book is lost before it starts, hence my adoration of writers such as Peter May and Ron Rash whose evocation of place is always perfect. So first big tick in the box to Rhodes who deftly depicts the ruggedness and solitude of her Scilly Isles location from the opening age, and consistently and atmospherically through the course of the book. The unique feel of this landscape, and the ever present changeable moods of the sea, provides the most sinister backdrop to her story, and I love the way that Rhodes manipulates this to add to the tension and emotion of the human dramas played out against its omnipresent influence. Indeed, many of the characters have an unbreakable and sometimes damaging connection to the sea, be it by occupation, by loss or by emotional disturbance and its influence looms large in the story and readers’ consciousness throughout.

I did like the character of DI Ben Kitto from the off, with his, at first concealed reasons for returning home, and his reluctance to re-engage with people from his formative years, adding a nice degree of shade and light to his character. I also enjoyed the way that we see him slowly assimilate himself back into the community, the pace of life, the pressures on peoples’ livelihoods, the suspicions of neighbours, and the reopening of conflicts from years past. This gave a very rounded feel to the particular pressures of living within such a small community, and how the actions of one person, is so deeply felt in the lives of the others. Kitto aside, I thought Rhodes’ characterisation was excellent throughout, and loved the disparate band of island dwellers who thwart or assist Kitto in his investigation. There was a real satisfying melting pot of characters, some infinitely more demonstrative than others, and the way that Rhodes’ uses them to portray the frustrations and hardships of island life, and the rootedness or need to escape each display.

Obviously with the premise of the book being a murder mystery, Rhodes works hard to achieve a marvellous modern interpretation of a classic locked room mystery, and she achieves this admirably. With only a finite number of suspects, I very much enjoyed the sense of personal detection she encourages in the reader in true Agatha Christie style, and I found the outcome of the book entirely satisfying. Hell Bay is a particularly strong start to a potential series, I hope, and one I shall follow with interest. Highly recommended.

(With thanks to Simon and Schuster for the ARC)