Journalist Rebekah Roberts works at New York City’s sleaziest tabloid, but dreams of bigger things. When she receives a letter from a convicted murderer claiming his innocence, she sees both a story she can’t ignore and, possibly, a chance.
Twenty-two years earlier, just after the Crown Heights riots exploded between the black and Jewish neighbourhoods in Brooklyn, DeShawn Perkins was convicted of the brutal murder of his adoptive family. Rebekah’s search for the truth is obscured by the decades that have elapsed: almost no one wants to talk about that grim, violent time in New York City, not even Saul Katz, a former NYPD cop and once her inside source….

A new-to-me author, despite Conviction being the third of Julia Dahl’s books to feature spirited and tenacious reporter Rebekah Roberts. Grappling with the weighty issues of race, religion, and justice this proved to be a markedly different, and thought provoking read…

In Rebekah we have a confident, young woman eager to prove herself and progress in her career, and what Dahl captures so well is her flexible, but not always completely unquestioning pursuit of information as a reporter. Instead of Rebekah just being depicted as a cold hearted, unfeeling reporter who will stop at nothing for a story, Dahl introduces in her moments of conflicted interest, and the sometimes very personal conflict that will arise from her investigation. Although we do see Rebekah adopt some little underhanded tricks of the trade to wheedle out the necessary information from people, there is a charm to her as a person that deflects us from condemning her methods on these occasions. Admittedly, she sees her current investigation as a chance to improve her career prospects, but as she delves deeper into what becomes a personal crusade for her to save a man from execution, she endears herself to us even more by making some difficult decisions on the information she must expose. Despite the ramifications for those closest to her, and with the potential to destabilize a recently rekindled relationship with her estranged mother, Rebekah’s navigation of this case kept me enthralled throughout, and I appreciated those small moments of vulnerability balanced with the clear sighted determination that Dahl weaves into her character.

As a depiction of the inherent racial conflicts that have plagued American society, I found this quite an even handed portrayal. Obviously, by exploring the differences between the Jewish and African American communities in New York in 1992 and 2014, Dahl provides a balanced assessment of both changes to, and the continuation of, the underlying resentments between the community of people she focuses on. As a black man convicted of multiple murder with little evidence and a coerced confession, sadly his story is all too familiar in the biased justice system and racial profiling so beloved in the American legal system. Equally, Dahl does not shy away from apportioning blame to the original investigating officers, and the whiff of corruption that pervaded this case from the beginning. I also found the focus on Jewish culture throughout the book extremely enlightening, and liked the no punches pulled attitude of the author to expose the best and worst of people’s behaviour no matter their ethnicity or creed throughout the story. The balance of morality and tenacity in Rebekah’s character to both reveal the tensions, yet applaud the instances of co-operation, between the two communities is firmly echoed by Dahl’s even handed and largely balanced authorial voice.

I enjoyed Conviction very much, and despite the necessary signposts in the book relating to the back story of Rebekah’s previous investigations, and the troubled relationship with her mother, I will definitely catch up with the first two books in the series at some point, having enjoyed the playing out of the story, and Dahl’s interesting dissemination of the issues of race, religion and justice. Recommended.

(With thanks to Faber Books for the ARC) 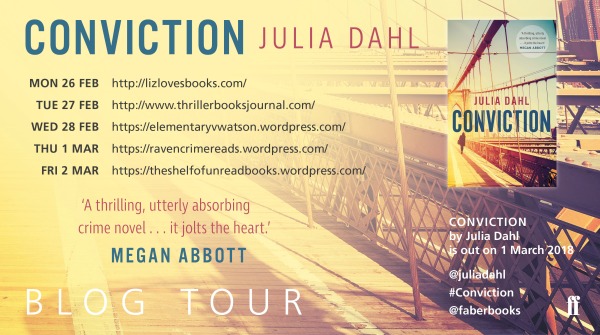