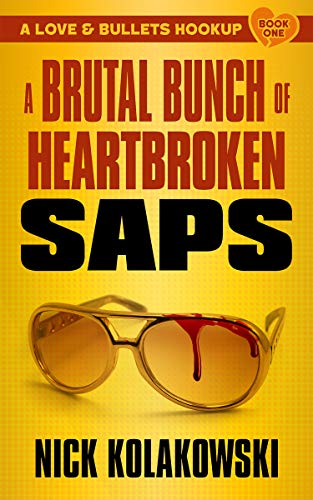 Bill is a hustler’s

hustler with a taste for the high life.

He  pulls off big scores for one of New York City’s more vicious gangs…until he suddenly grows a conscience. However, living the clean life takes a whole lot of money, and so Bill decides to steal a fortune from his employer before skipping town.  With a bag of cash in the trunk of his car, Bill heads west, ready for a new life. But all that money makes him a tempting target for some bad people he meets on the road—and if that wasn’t dangerous enough, some old friends are close behind him, and they intend to make a trophy of his head.  Pursued by crooked cops, dim-witted bouncers, and a wisecracking assassin in the midst of a midlife crisis, Bill will need to be a quick study in the way of the gun if he wants to survive his own getaway. Who knew that an honest attempt at redemption could rack up a body count like this?

Being a confirmed fan of deep down and dirty hardboiled American crime, and in the style of Castle Freeman’s Go With Me, or Denis Johnson’s Nobody Move, Kolakowski ticks all the boxes in this pert and stripped down tale of cross and double cross. Inhabited by a marvellous cast of emotionally battered, violent, scheming, characters all on the make, and up to their necks in trouble, the story veers between biting, razor sharp humour, punchy visceral violence, and a strangely unsettling probing of the character’s inner lives exposing a strange degree of emotional frailty, and the need to be loved. Despite being a relatively slim read, Kolakowski packs it to the gills with movement and action, and also has the good sense to include a feisty kick-assing female character in the testosterone -fuelled mix, who proves a perfect foil to the hapless Bill.

It’s a maelstrom of fast, furious action with Coen-esque tendencies that I whipped through at a cracking pace, fully appreciative of the more surreal concept of a hitman in strange attire that comes out of nowhere, before a brilliantly violent, and strangely pathos filled conclusion.

I have my concerns over how Kolakowski’s mind works, but I found this deliciously deranged and very pleasing indeed. Worryingly, perhaps this also says something about me. Recommended.

(With thanks to Shotgun Honey for the ARC)

5 thoughts on “Nick Kolakowski- A Brutal Bunch of Heartbroken Saps”