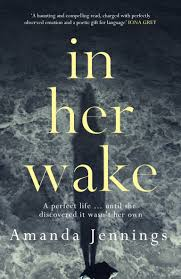 Welcome to the latest stop on the blog tour marking the paperback release of Amanda Jennings’ psychological thriller In Her Wake, an emotionally intense exploration of familial relationships, attracting widespread acclaim from readers and reviewers alike…

A tragic family event reveals devastating news that rips apart Bella’s comfortable existence. Embarking on a personal journey to uncover the truth, she faces a series of traumatic discoveries that take her to the ruggedly beautiful Cornish coast, where hidden truths, past betrayals and a 25-year-old mystery threaten not just her identity, but her life, reminding us that sometimes the most shocking crimes are committed closest to home.

This is an incredibly female-centric novel, with the author quite evidently showing the amount of time and intensity she has invested into her two central protagonists, Bella and Dawn. Trying hard to avoid any major plot spoilers, the difficult emotional issues that lie between the two women as they seek to build a relationship after many years of estrangement is powerfully drawn, and Jennings spends a considerable amount of the book exploring Bella’s emotional journey in particular, which counterbalances to a degree the slight suspension of disbelief that the reader needs as the story unfolds. Bella is an entirely credible and empathetic character whose growth in stature and confidence drives the book onwards, and refreshingly, she is imbued with a host of insecurities that will be instantly recognisable to the female readership. As she seeks to overcome the trauma of her uncertain background, there is much soul searching and naval gazing on Bella’s part which worked to a certain degree, but at times, through no fault of the author, slowed the narrative down too much- this could have been addressed in the editing stage. Equally, Dawn’s story is crucial to the success of the book, and was for me far more engaging with her difficult emotional background, and her life curtailed by her fierce loyalty to her mother. The sacrifices she has had to make which have thwarted her potential for a far more satisfying life, have set her on a very different course to which she imagined. However, with the strength of the female characters so clearly in evidence throughout, an inevitable consequence of this was the more two-dimensional drawing of the male characters in the book, which did tend to descend into a rather clichéd compartmentalising of the worst male character traits, physical abuser, lothario, controller, doormat, and so on. Consequently, I found my reading experience was frustrated by this underlying feeling of implausibility and frustration as to the male characterisation, but the portrayal of the female characters was more successful and carried the book.

Back on a positive note though, I loved Jennings’ portrayal of Cornwall itself and its unique landscape and weather patterns which so cleverly seemed to echo and reflect the surge of emotions that arise in Bella. The changeable nature of the natural environment of Cornwall is consistently drawn on throughout, so like Bella you can almost feel the sand between your toes, coupled with the mercurial mixture of rain, sun and breeze, and the stomach dropping wonder of a stroll along rugged cliff-tops, with the waves crashing below. I thought this added an overall additional intensity to the emotional turbulence of the plot itself, and very much enjoyed Bella’s perambulating exploration of unfamiliar terrain. In common with Simon Sylvester’s The Visitors which draws on the Scottish folkloric traditions of the Selkie, Jennings uses the Cornish equivalent with her inclusion of mermaid myths, which provided another point of local interest in the book.

Hence, In Her Wake proves itself to be a largely satisfying example of more literary domestic noir, in the currently overcrowded market for this particular genre. The more obvious flaws in the plot, and the weaknesses evident in the male characterisation are roundly dispelled by the strength of Jennings’ female characterisation which is compelling throughout, and the unfailingly pictorial part that her chosen location of Cornwall plays within the book.

Catch up with, or keep following the In Her Wake Blog Tour at these excellent sites! 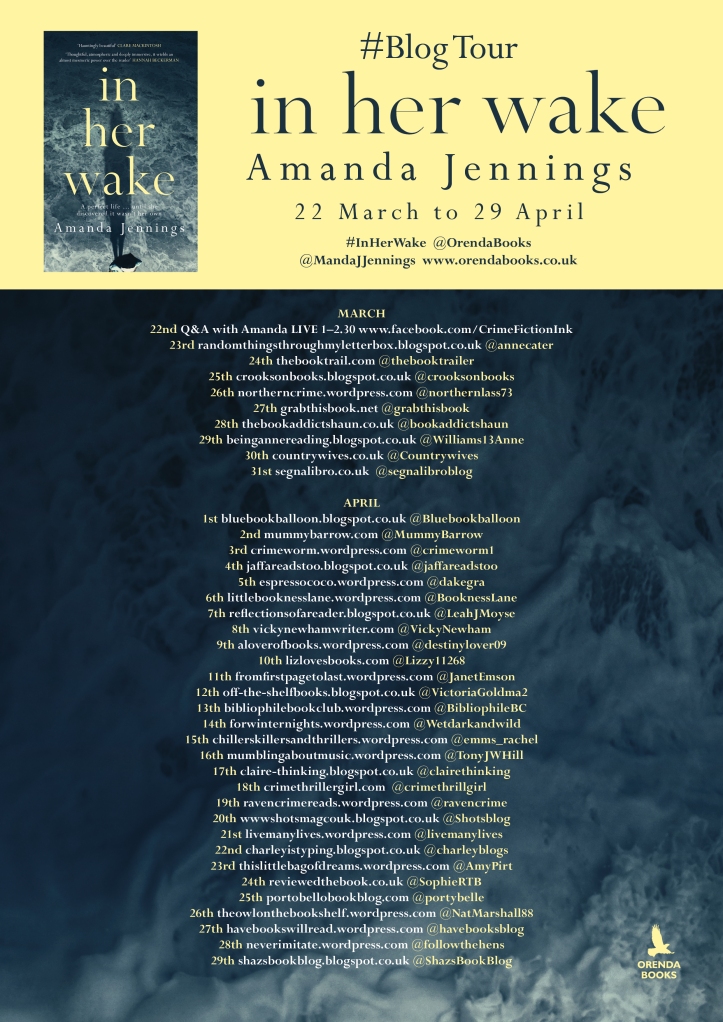