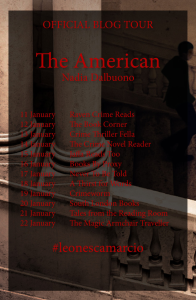 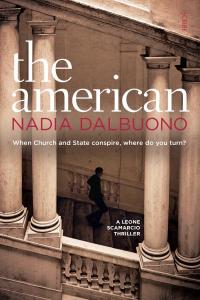 A big welcome to you all for Day One of the Nadia Dalbuono Blog Tour to mark the release of her second Italian crime thriller The American,  featuring charismatic detective Leone Scarmarcio.

Having waxed lyrical about Dalbuono’s debut The Few (which also earned a well deserved place in my Top 5 of 2014), I approached The American with an equal sense of excited anticipation and hesitation- could it honestly be the equal of the first one? I can, however, confidently say with its scope, intelligence, and assured writing that it’s even better. What Dalbuono exhibits in this second book is a further growth in her writing and storytelling that is totally mesmerising. Not only does she have the firm foundation of a mercurial, interesting and multi-faceted central detective who owns every scene he inhabits, but there is an intelligence to her plotting and central storyline that keeps the reader hooked throughout.

Scamarcio is still battling with the pull of his Mafia connections, often to the detriment to his career as a police detective, but finds himself entangled in a case with far reaching and dangerous implications to himself, and those closest to him. Driven by a fire within himself, that often necessitates himself to keep control of his base anger, he is a dogged and focussed detective, whose shades of grey are slowly revealed in the course of this investigation. Not averse to a little extra-curricular pick me ups, his mental and physical mettle are sorely tested throughout the book, as he becomes immersed in a case that crosses continents, invoking the ire of both the Vatican and American security services, as he navigates his way through a mass of corruption and conspiracy that would easily defeat lesser men. He is a real lynchpin to the enjoyment of this book, and as the pressure grows the reader cannot help but be firmly in his corner.

The plot is fairly complicated and attention must be paid, and my advice would be that if you want the secret world of the Vatican revealed to you with far more intelligence and steely-eyed intuitiveness than The Da Vinci Code, look no further my friends. The plot segues between time frames and locations with consummate ease, and I learnt many things previously unknown, as to the far reaching tendrils of the Vatican and the power it has exerted across the globe. Dalbuono explores the theory of the ‘strategy of tension’ (the stirring of unrest in underdeveloped countries/powder keg communities to the benefit of powerful governments in other countries) in some detail, and how the perpetrators of this so roundly benefit from their less than honourable actions. With the story pivoting between Europe, the United States and Latin America, there is a tremendous scope and power to the plot, and some reveals that leave a nasty taste in the mouth as to the way that church and state manipulate the masses. It’s powerful, matter of fact and heightens the book to a thriller beyond the normal fare. Dalbuono also carefully suffuses the book with an assured mix of implied and overt violence, so the more cerebral content of the book is tempered by the suddenly shocking interludes of base human instincts, to great effect. 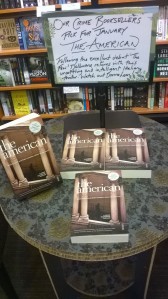 To be honest, there is little more praise I can heap on this book, and having already installed it as one of my picks for January in the bookstore where I work, I can only urge readers of this blog to seek this one out for yourselves. An early contender for my Top 5 of 2016 too…

Don’t forget to visit The Book Corner  for the next stop on the tour too!