To celebrate the launch of David Baldacci’s latest novel, The Escape, as well as the paperback publication of his fourth Will Robie novel, The Target,  I am  pleased to welcome the author to Raven Crime Reads as part of his blog tour. In this special blog post David discusses the roles of heroes and villains in his writing…

“For a writer who didn’t start out crafting thrillers, I have certainly written a lot of them. And they’re fun and fast and people seem to really love them. But along the way I’ve tried my hand at other genres and enjoyed them all. Whether it be a family drama, a light-hearted mystery on a train over Christmas or a YA fantasy title, for me the story is the thing. If you keep doing the same thing over and over, you’ll get the same result. That’s why I strive mightily to get out of my comfort zone and challenge myself to do things differently. I like to create different series with very diverse characters inhabiting each, to throw off complacency by tackling subject matters that force me to go out and learn, and then write, about a totally new world. Fear is a great antidote to complacency and fear is a great thing for a writer. Otherwise, you become formulaic.

I think readers enjoy crime fiction for a variety of reasons, aside from the obvious fact that it tends to be exciting and fast-paced. As children we loved (and hated) to be scared by the boogeyman. We wanted to look under the bed or in the dark closet, but at the same time we were terrified to do so. Adults retain this childlike wonder about being scared. We like to be scared from a safe distance, and that’s what crime fiction provides. It also allows readers to root for heroes, which we always need, both in real life and between the pages. And it allows us to root against, even if we find them curiously fascinating, the villains. After this battle is concluded and one side (usually good) wins out, we have closure, which people also like, but sometimes, maybe oftentimes, do not find in real life.

In that way, a good crime story can be perfect for what ails us!

Among my favorite villains in my own books is Jackson from The Winner. That book is fifteen years old and I still get fan letters asking if Jackson is going to come back. Chung-Cha from The Target was probably the most sympathetic villain I ever created. Sam Quarry from First Family is a close second on that score. I tend to favor villains who live in the gray area, doing the wrong thing for what they believe are the right reasons. Knights in shining armor are scarce if even nonexistent. Good people do bad things for what they believe are the right reasons. Robie and Reel are prime examples of that. Conversely, villains who are simply purely evil are boring. The gray in life is what fascinates me.”

David Baldacci is a worldwide bestselling novelist. With his books published in over 45 different languages and in more than 80 countries, and with over 110 million copies in print, he is one of the world’s favourite storytellers. David is also the co-founder, along with his wife, of the Wish You Well Foundation, a non-profit organization, dedicated to eliminating illiteracy across America. Visit his website here . 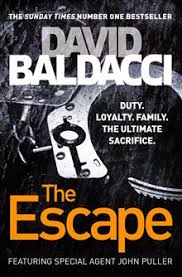 Military CID investigator John Puller has returned from his latest case to learn that his brother, Robert, once a major in the United States Air Force and an expert in nuclear weaponry and cyber-security, has escaped from the Army’s most secure prison. Preliminary investigations show that Robert – convicted of treason – may have had help in his breakout. Now he’s on the run, and he’s the military’s number one target.John Puller has a dilemma. Which comes first: loyalty to his country, or to his brother? Blood is thicker than water, but Robert has state secrets which certain people will kill for. John does not know for sure the true nature of Robert’s crimes, nor if he’s even guilty. It quickly becomes clear, however, that his brother’s responsibilities were powerful and far-reaching.With the help of US intelligence officer Veronica Knox, both brothers move closer to the truth from their opposing directions. As the case begins to force John Puller into a place he thought he’d never be – on the other side of the law – even his skills as an investigator, and his strength as a warrior, might not be enough to save him. Or his brother…

I have a copy of The Escape  up for grabs as an early Christmas gift! For a chance to win just head over to Twitter and tweet me @ravencrime with the message ‘Escape with Baldacci’ and I will randomly select one lucky winner. The closing date is 3rd December and giveaway open to UK entrants only. Good luck!