Claire Kendal- The Book of You 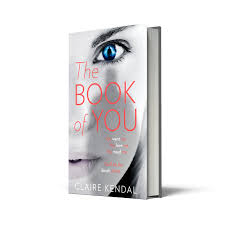 Clarissa is becoming more and more frightened of her colleague, Rafe. He won’t leave her alone, and he refuses to take no for an answer. He is always there. Being selected for jury service is a relief. The courtroom is a safe haven, a place where Rafe can’t be. But as a violent tale of kidnap and abuse unfolds, Clarissa begins to see parallels between her own situation and that of the young woman on the witness stand. Realizing that she bears the burden of proof, Clarissa unravels the twisted, macabre fairy tale that Rafe has spun around them – and discovers that the ending he envisions is more terrifying than she could have imagined.

Fitting perfectly into the hugely sucessful crime genre of psychological suspense, prepare to enter Clarissa’s world- a complex but increasingly insecure woman, whose nightmare experience at the hands of a stalker, is laid bare in this compelling debut novel…

I think I can safely say that the majority of women have experienced at some time in their life the unwelcome attentions of another individual, admittedly not to the horrifying degree of Clarissa, but enough to unsettle and to impact in some way on your daily life. In The Book of You, Kendal amplifies this experience to terrifying heights, as her protagonist Clarissa, after a drunken one night stand (which actually reveals that she was date-raped) is then subjected to the creepy and slowly escalating attentions of her attacker Rafe. Rafe, a respected university lecturer, is imbued with a conniving and dangerous intelligence, that reveals itself gradually throughout the book, whilst highlighting the increasing inability of Clarissa to take action against him. He cleverly pre-empts her every move, and by degrees, Clarissa comes to realise that any course of action she may take would be largely ineffectual, as he tightens his grip on the control of her life, and disempowers her. By far the strongest aspect of this book is the way that Kendal portrays the increasingly questioning and undermined state of Clarissa’s interior monologue. With every move that Rafe makes, Clarissa cannot see past the fact that she would not be believed as he skilfully paints himself as more of an emotional victim at the hands of a neurotic woman. The frustrations that Clarissa experiences and that are relayed to us, are not only realistically portrayed, but raise a sense of frustration in the reader as we see Clarissa increasingly manipulated and outmanoeuvred by Rafe. This leads to an intensely claustrophobic reading experience akin to Elizabeth Haynes’ brilliant Into The Darkest Corner, where Kendal replicates the overbearing tension of psychological suspense.

In a parallel narrative, Clarissa has to embark on several weeks of jury service, observing the unfolding tale of a young woman brutally attacked and raped, by a group of men. As Clarissa’s own personal mental torment, ebbs and flows within the book in conjunction with the court case, there is a nice overlapping of these two tales that are defined so closely by their similarities. Two women who are fighting to be believed. I must admit I wasn’t altogether taken with the growing emotional relationship between Clarissa and one of her fellow jurors, and found this a all a bit forced and unnecessary, adding little to the plot overall, as her emotional distrust of men at this point would be unlikely to make a romantic entanglement under such emotional strain. I did, however, enjoy the increasing steel that Clarissa begins to show in extricating herself from Rafe’s dangerous attentions, so the descent into silly weak woman mode with her stereotypical hunky fireman, is offset.

Overall, a good suspenseful read with enough of the well-executed tension and suffocating claustrophobia that such a situation would produce in its victim. Kendal maintains a good pace of plot for the most part, and I found this a relatively quick and satisfying read, as the pace and reveals of the plot do make you reluctant to put down or break away from your reading. A good debut, and perfect for fans of a well-written psychological tale.

Claire Kendal was born in America and educated in England, where she has spent all of her adult life. The Book of You is her first novel. It will be translated into over a dozen languages. Claire teaches English Literature and Creative Writing, and lives in the South West with her family. She is working on her next psychological thriller.

(With thanks to HarperCollins for the ARC,  and the incredibly sinister, but beautiful,  black rose that arrived on Valentine’s Day…)