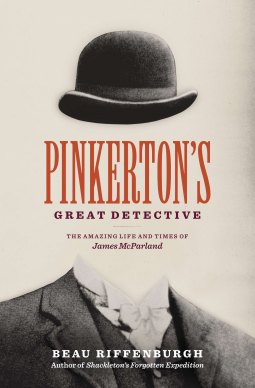 The story of the legendary Pinkerton detective who took down the Molly Maguires and the Wild Bunch. The operatives of the Pinkerton’s National Detective Agency were renowned for their skills of subterfuge, infiltration, and investigation, none more so than James McParland. So thrilling were McParland’s cases that Sir Arthur Conan Doyle included the cunning detective in a story along with Sherlock Holmes. Riffenburgh digs deep into the recently released Pinkerton archives to present the first biography of McParland and the agency’s cloak-and-dagger methods. Both action packed and meticulously researched, Pinkerton’s Great Detective brings readers along on McParland’s most challenging cases: from young McParland’s infiltration of the murderous Molly Maguires gang in the case that launched his career to his hunt for the notorious Butch Cassidy and the Wild Bunch to his controversial investigation of the Western Federation of Mines in the assassination of Idaho’s former governor.
Filled with outlaws and criminals, detectives and lawmen, Pinkerton’s Great Detective shines a light upon the celebrated secretive agency and its premier sleuth.

I just wanted to draw your attention to this absolutely absorbing mix of true crime and historical biography, published in the UK next month. For several years I have had a  fascination with the origins and deeds of the famous Pinkerton Detective Agency and it’s involvement in many differing spheres of criminal activity within this fascinating period of American history, This biography is excellent because, as the author states himself, there is a wonderful sense of misdirection and misrepresentation at work in unravelling the history of both the history of this famous institution and its main figures. By creating and embellishing their own histories, particularly in the case of the charming Irishman, James McParland himself, there is a palpable sense that the reader is never really in possession of all the true facts relating to him and the agency, which fuels  feeling of the ‘unsolved’ in relation to the detectives and the cases they are embroiled in. I loved the atmospheric and period detail in relation to the activities of the infamous Molly Maguires and the wild, wild West,  amongst other cause celebres, and the depth and scope of Riffenbaugh’s research throughout which paints such a rich and authentic portrait of the social, political and criminal activities of this era. An utterly engrossing account of both an enigmatic character, and a fascinating institution so steeped in history with more than one mystery of its own…

(I downloaded this as a galley in Kindle format via www.netgalley.com )