An Interview With Simon Toyne

Simon Toyne was born in the North East of England in 1968. After nearly twenty years working in commercial television he quit his job and took seven months off to write a novel. It took two and a half years to finish it. Fortunately SANCTUS got picked up by an agent and then by lots of publishers all over the world. He has no idea what would have happened if it hadn’t. He is now regularly compared, both favourably and unfavourably, to Dan Brown, even though he does not possess a tweed jacket.

You can find out more at: http://www.simontoyne.net/ and read my reviews of  Simon’s books here:  Sanctus/The Key.

What do you think it is about religious conspiracies and evil, scheming monks that grips our imagination so, particularly in terms of the success of this fiction genre?

Religion is endlessly fascinating, it deals with all the big questions of who we are, where we’re from, where we’re going to. It’s also very mysterious and mystical. And monks are just weird and scary on some primordial, instinctive level. They’re unnatural somehow, like clowns.

I keep picturing Gabriel as a Sir Lancelot type figure in true Arthurian tradition. I think there is very much a feel of the traditional ‘quest’ form about the books and the struggle between good vs evil. Was this an influence at all?

Not a direct influence but I was definitely going for an old-fashioned, mythical feel to these books – even though the setting is modern. And good vs evil is the foundation stone of all thrillers.

One very positive of the book was your success at writing strong, credible female characters particularly Liv Adamsen, without resorting to cliche. Her characterisation seemed effortless but how easy was it?

Thank you. It certainly wasn’t effortless but I’m very glad it ended up seeming that way. I wanted Liv to be a hero in the Clarice Starling/Jodie Foster way, in that she’s strong but vulnerable and succeeds by using her qualities as a woman and a person, not by turning into some sort of proto-male who kicks ass and asks questions later. It was her vulnerability and bravery that made her the best person to tell the story and for me everything grows out of the needs of the story.

How far into the writing process did the idea of a possible trilogy take root or did you know from the outset?

It started suggesting itself about three quarters of the way through writing ‘Sanctus’ when I was nearing the end and thinking ‘how the hell am I going to wrap all this up?’. I knew what the ending was in terms of the identity of the Sacrament, but by then I had set up all these characters and situations that I knew wouldn’t just shut up and go away when the secret was revealed. The first draft had a very unsatisfactory ‘one year later’ style whistle stop tour of all the main characters and a kind of reader’s digest summary of what happened after the Sacrament was revealed. I never really liked it and when I sold the book about the first thing my publisher asked was ‘what are you going to write next?’ and ‘I’m not so keen on the ending’. So we talked about it and that hurried ending has now turned into two other books. 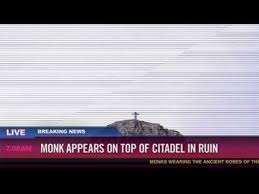 As I said in my review your attention to historical, textual and geographical detail is superb throughout both books and your research must be incredibly thorough. I recently read a prizewinning thriller where the writer’s level of research had a real sense of ‘look how clever I am’ to the detriment of the plot- a flaw that you skilfully avoided. How do you approach the research process and how hard is it to balance the fiction with the fact without one obscuring the other?

I don’t actually do that much research at the outset. I’ll do some that I know I’ll need to know, like how monasteries work, but the rest I make up as I go along and anything I need to check I WRITE IN CAPITALS so as not to interrupt the flow of the story then look it up later. It’s amazing how many times my guess is pretty close to the truth anyway. Other times the truth is too dull so I go with my version. I also have a Tom Stoppard quote taped to the side of my screen which says “Just because it’s true, doesn’t mean it’s interesting.”

Apologies for this old chestnut of a question but have you any writing influences or simply writers that you gain the most pleasure from reading or re-reading?

I think if you’re a writer you are influenced by everything you read, good and bad, and it’s one of the great requirements of the job that you should read widely and often.

And just for fun….

What is your worst habit? I have a tendency to not finish senten…

Any book you wish you had written?  ‘The Silence of the Lambs’

Glass half full or half empty? I have a glass?

Dad dancing or Strictly Come Dancing? I manage to pull off both at the same time (it’s a skill)

Catch up with Simon at: