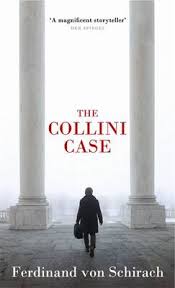 For thirty-four years Fabrizio Collini has worked diligently for Mercedes Benz. He is a quiet and respectable person until the day he visits one of Berlin’s most luxurious hotels and kills an innocent man. Young attorney Caspar Leinen takes the case. Getting Collini a not-guilty verdict would make his name. But too late he discovers that Collini’s victim – an industrialist of some renown – is known to him. Now Leinen is caught in a professional and personal dilemma. Collini admits the murder but won’t say why he did it, forcing Leinen to defend a man who won’t put up a defence. And worse, a close friend and relation of the victim insists that he give up the case. His reputation, his career and this friendship are all at risk. Then he makes a discovery that goes way beyond his own petty concerns and exposes a terrible and deadly truth at the heart of German justice . . .

This is the first novel by Ferdinand von Schirach that I have read and I was instantly absorbed into a world where the legal system can systematically fail those in search of justice. The story opens with an apparently cold-blooded and nonsensical murder where the perpetrator (a man in his sixties) takes full responsibility for his actions and there is no question of his guilt in murdering a prominent German industrialist, Jean Baptiste Meyer. His case is taken on by Caspar Leinen, a newly qualified defence lawyer who finds himself facing a seemingly unwinnable case, but as the story progresses becomes more entangled on a personal level due to his history with the victim of the crime. During the course of the trial Leinen finds himself pitted against the legal brain of Mattinger, an incredibly experienced lawyer who sees the spark of promise in Leinen who proves himself a worthy opponent. As the trial unfolds the impact of brutal events in Germany’s former history bring light to bear on contemporary proceedings but can justice truly been done?

I will concede that I am not usually keen on books that depict courtroom trials, but I was utterly absorbed by the unfolding of events in the course of the narrative. I think this was mainly due to the almost dispassionate and emotionally removed style of von Schirach’s writing which merely presents events in a spare and pared down style not given to unwarranted bouts of emotion. The reportage of the events some decades previously were so pared down in fact that it causes the reader’s imagination to be powerfully affected by these incidents in their sparsity thus making them even more palpable. Particularly interesting was the way that history was introduced almost as another character within the narrative as it’s influence and path of events so dictated the actions of the central protagonists in the novel, leading to Collini’s actions and the reasons for these as he is forced to seek violent retribution when failed by the legal system. The plot unfolds at an extremely measured pace which suits the style of the narrative perfectly as the hidden layers of the story are slowly revealed.  Equally interesting is the development of Leinen, the lawyer from newly qualified lawyer to a man confronted with the weaknesses of a legal system that he has pledged to dedicate his life to and also to his realisation that human nature can conceal the darkest deeds from those closest to them.

I am reluctant to draw on cliches, but I genuinely feel that this book will stay in my mind for some time to come, due to the wholly affecting and thought provoking nature of von Schirach’s prose and I will certainly be seeking out other works by this author in the future.

‘The Collini Case’ is due for publication 13th September- Michael Joseph

(My reading copy was supplied in Kindle format by NetGalley http://www.netgalley.com/ )