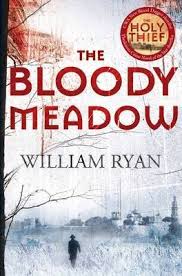 Was nice to catch up with William at CrimeFest as he had very kindly sent me a copy of  his excellent Korolev thriller ‘The Bloody Meadow’ to read and review. A thoroughly nice chap he is too!

In ‘The Bloody Meadow’ we are once again immersed in the claustrophobic and paranoid atmosphere of Stalinist Russia, in this the follow up to Ryan’s remarkable debut `The Holy Thief’. Our erstwhile hero and investigator Captain Korolev becomes embroiled in the suspected suicide of a beautiful young woman working as a film production assistant, and is uprooted from the relative safety of Moscow to the wilds to investigate. A seemingly straightforward case one would think, but as Korolev gets drawn in deeper to her complicated private life and her links to an especially violent period of Russian history, dark secrets are unearthed and Korolev must revisit an unpredictable and dangerous ally from the past to thwart a perilous plot at personal risk to his life and career.
Ryan’s attention to historical detail is masterful and because the novel is so rooted in the reality of this period, one truly gets the sense of the fear of speaking one’s own mind and the inherent suspicion of others that was fuelled by the suffocating and paranoid dictatorship of Stalin. This attention to historical detail and sense of place is counterbalanced by the precision of the plotting and a cast of truly well-drawn characters and the storyline is also underscored by moments of mordant humour that catch the reader unawares. I really liked the introduction of Slivka, a young female investigator who becomes invaluable to Korolev’s investigation and the reappearance of Kolya- the leader of The Thieves- was a welcome surprise as despite his criminal tendencies, he makes a wonderful foil to Korolev’s role as law enforcer. I would heartily recommend this book as a terrific criminal read but also as an astute and well-observed depiction of a terrifying period of Russian history. More than just a crime novel…